Ben Askren has become synonymous with Jorge Masvidal after he suffered a 5 second knockout at the hands of ‘Gamebred’ in 2019.

The former ONE and Bellator welterweight champion shot for an early takedown but was caught by a flying knee. It was an iconic finish for Masvidal. The stoppage that launched a thousand memes. In reality, it was probably a lot more that that. The moment was so significant for Masvidal that he even got it tattooed on his shoulder and turned into t-shirts.

After beating Askren, The American Top Team star went on to win the BMF belt against Nate Diaz. He then fought for the welterweight title twice. 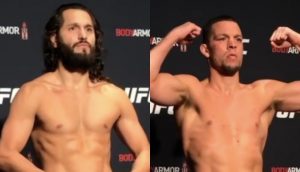 Askren now sees his old rival as a “Journeyman bum” – but he’s found humour in the aftermath of the knockout.

“My first recollection there was — this is hilarious — I sit up and I see Luke Rockhold, and I’m like, ‘F***, that’s Luke Rockhold. That means I’m in the hospital,’” Askren said. “That was what I thought, because I knew he already got knocked out by Jan Blachowicz. And I sit up and I’m like, ‘What’s Luke Rockhold doing here? F***, I’m in the hospital.’ And then I looked and I saw my wife was over here, so I’m like, ‘What happened?’ And she’s like, ‘It wasn’t good.’ I’m not sweaty, I could feel like I’m not sweaty at all, I’m not sore, I didn’t hurt at all, so it was like, I must not have been in a hard fight or nothing. I kind of knew that.”

Askren fought one more time after his loss to Masvidal. Three months later, he returned to Singapore where he’d racked up a trio of submission victories during his time with ONE. It did not go the way of the former Olympian and he was tapped by a rear naked choke in the third round against Demian Maia.

It’s been two years since that night in The Lion City and the Wisconsin-native remains happily retired. He has, however, said that he would come out of retirement for another crack at Masvidal.

Would you like to see Askren and Masvidal run it back one day?

This article appeared first on BJPENN.COM
Previous articleKhabib Nurmagomedov says he doesn’t miss fighting, shoots down the idea of a comeback: “It was never inside my heart”
Next articleVolkan Oezdemir plans to KO Nikita Krylov in the first round at UFC 280 to “get one back” for Alexander Gustafsson
© Newspaper WordPress Theme by TagDiv