On March 4th, top ranked UFC lightweights Khabib Nurmagomedov and Tony Ferguson will be stepping into the Octagon to fight for the interim lightweight championship in UFC lightweight champion Conor McGregor’s absence. It took several weeks for the UFC to finalize the bout, and while it looked as though the UFC and Ferguson would be able to reach a deal after Ferguson expressed his desire to hold out for more money from the promotion, the promotion was able to secure the fight for the co-main event of UFC 209.

Now, with the scrap finalized, Khabib Nurmagomedov spoke to MMAJunkie to give his prediction for the bout, as well as his plans for the future:

“This is what I want: A fight with Tony. I’m going to finish him. After (that), finish Conor and the UFC maybe (will) want to make a rematch with Conor. But I say no. This is a very interesting situation. Finish Tony Ferguson, finish Conor McGregor … at the end of the year, maybe UFC (will) try to make a rematch. But I’ll say, ‘Bye-bye guys.’ He doesn’t deserve this. Then I’ll fight with another real contender.”

“I need only Tony,” Nurmagomedov said. “I don’t need your small guys like Jose Aldo or other guys. I need real, top-level fighters.’ Because if I beat Jose or I beat Daniel Cormier, people are still talking about Tony Ferguson. That’s why I said, ‘Please give me Tony. I’m going to finish his win streak. Finish him.’ And after that, what happens? No more opponents.”

“When the cage closes, I’m going to smash him,” Nurmagomedov said. “I’m going to make him tired and I want him to feel my power and feel my pressure and finish him – break his face, because this is what I do all my life. I’m fighting in the UFC. I fought before the UFC in Russia, all the time fighting tough fighters. When the cage closes, nothing is personal. I want to just finish guys.” 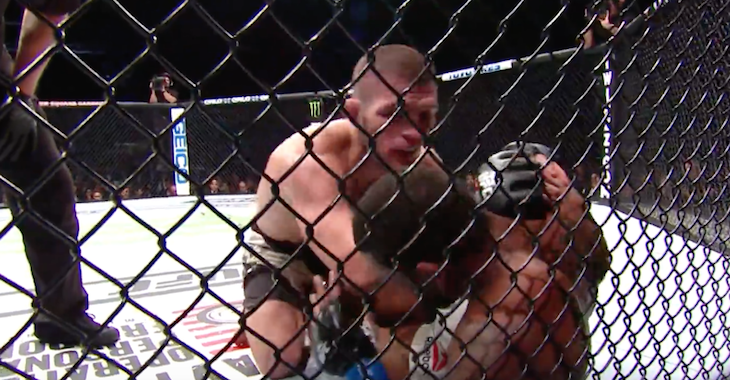