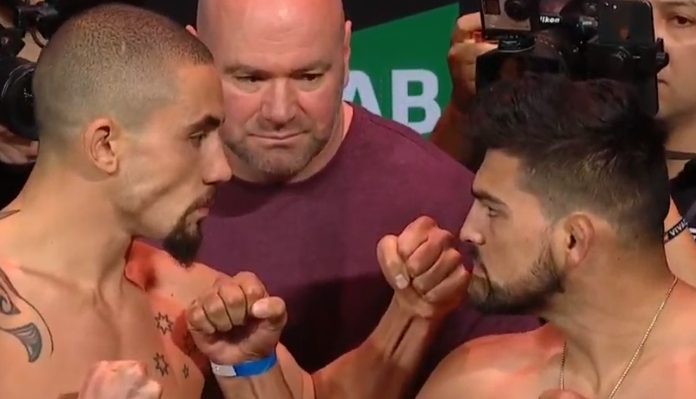 Robert Whittaker will still headline the April 17 card after all.

Late Monday night, it was revealed Paulo Costa was out of his fight against Whittaker due to ongoing complications from COVID-19. The hope for the Brazilian was to push the fight back a couple of weeks. However, that will not be the case. According to Contreas Legaspi and later confirmed by ESPN, Gastelum has agreed to step up on short notice to fight Whittaker.

Robert Whittaker and Kelvin Gastelum were supposed to fight at UFC 234 for the middleweight title after being TUF coaches. However, on the day of the fight, Whittaker was forced out of the bout. Gastelum went on to lose to Israel Adesanya two months later for the interim title.

Robert Whittaker is on a two-fight winning streak after beating Jared Cannonier and Darren Till by decision. Before that, he suffered a second-round TKO loss to Israel Adesanya to lose his middleweight title. The hope for “The Reaper” was to not have to fight on April 17 and instead rematch Adesanya for the belt in a few months. Yet, that did not come to fruition.

Kelvin Gastelum, meanwhile, returned to the win column last time out with a decision win over Ian Heinisch at UFC 258. Since losing out on his title fight against Robert Whittaker, Gastelum went on a losing streak losing to Israel Adesanya, Darren Till, and Jack Hermansson. He now gets a chance to prove he would’ve been the middleweight champ if he beats Whittaker.

If Whittaker beats Gastelum on April 17 it is likely he would get a rematch with Adesanya to try and reclaim his belt. If Gastelum wins, although his fight with “The Last Stylebender” was phenomenal, he would likely need another win or two.

Who do you think will win, Robert Whittaker or Kelvin Gastelum?