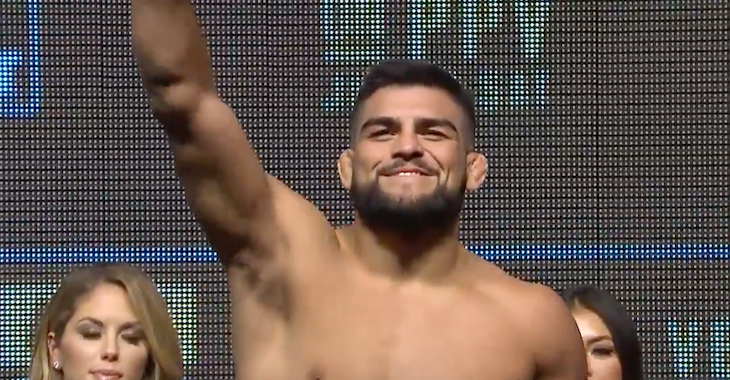 Good news for fight fans in Toronto. Despite being dealt a sizeable suspension by the New York State Athletic Commission, Kelvin Gastelum is good to go for UFC 206. The Ultimate Fighter 17 winner will return to the middleweight division to take on Tim Kennedy on the December 10 event’s main card.

This news was confirmed by Ariel Helwani of MMAFighting.com.

Gastelum was handed his six month suspension for not showing up to the weigh ins for UFC 205, where he was scheduled to take on Donald “Cowboy” Cerrone at welterweight. The reason for the suspension was not so much that he didn’t make weight, but that he didn’t step on the scale.

Luckily for Gastelum and his fans, he was able to dodge this suspension by paying a $2000 fine – peanuts compared to not being able to fight for half a year. With this fine paid, he’s now allowed to compete again, which means he’ll be able to fight Kennedy in two weeks. This bout with Gastelum marks the end of an arduous road for Kennedy. Originally, the Strikeforce veteran was supposed to welcome Rashad Evans to the middleweight division at UFC 205. Regrettably, Evans didn’t pass his pre-fight medicals, and this fight was bumped back to UFC 206, several weeks later. Unfortunately, the Ontario Athletic Commission also opted not to license Evans, which left Kennedy without an opponent again. With his suspension squared away, Gastelum will now fill that void.

Gastelum will enter his bout with Kennedy having recently out-duelled former welterweight champion Johny Hendricks to a unanimous decision win. Prior to that win, he alternated wins over Jake Ellenberger and Nate Marquardt with losses to Tyron Woodley and Neil Magny. Though he has voiced interest in returning to the welterweight division after this bout, it’s not known if he’ll ever be allowed to do so. UFC President Dana White certainly doesn’t seem keen on the idea.

Kennedy, meanwhile, will enter the bout having not fought since September of 2014, when he was knocked out by top middleweight contender Yoel Romero in a controversial fight. Prior to that loss, he went 3-0 in the UFC’s Octagon, defeating Roger Gracie, Rafael Natal, and current middleweight champ Michael Bisping.

Who do you think comes out on top when Kennedy and Gastelum collide at UFC 206? Sound off in the comments section, PENN Nation!