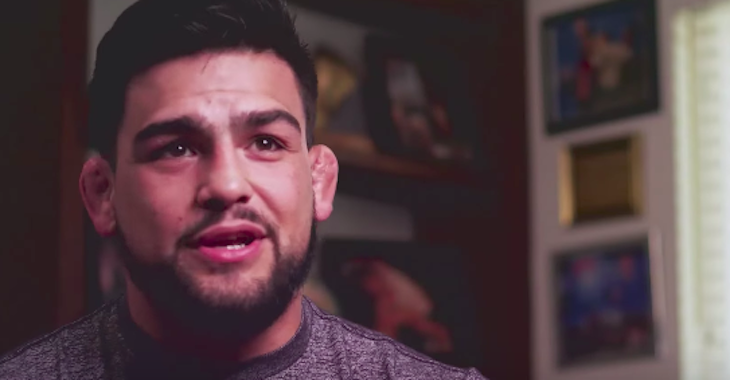 It didn’t take Nostradamus to predict that Kelvin Gastelum wasn’t going to like Luke Rockhold getting the title shot against Robert Whittaker. The next day after Georges St-Pierre announced he was leaving the middleweight division, the title was vacated and the UFC made Rockhold’s fight in Perth with Whittaker for the undisputed belt. Gastelum felt like he deserved it after knocking out Michael Bisping, who just carried the title a month ago, and has been pleading his case over social media ever since.

“I knew Luke Rockhold and I were both in the front-running for this fight. I was then told Robert Whittaker wanted the tougher fight and he picked Rockhold. In my opinion that is the easier fight because I feel I’m the toughest fight for anyone in this division. I think Whittaker took the easier fight by going with Luke. He’s absolutely worried about me and for good reason. He and I have trained together in the past and know what the other is all about. We know what the other brings to the table.”

Y’all forgetting Luke is also on a 1 Fight win streak! Got KOd by the guy I just beat! Came back after 2 yrs to beat a guy who didn’t compete in Ufc a year ago https://t.co/miuaO0mC2O

“The situation bothers me a little bit with him choosing to fight Rockhold over me. Luke has pretty much been out for two years then comes back and fights David Branch, who wasn’t even competing in the UFC a year ago. He beats Branch and gets the title shot so I don’t know what that says about [the UFC] but it’s not good. That situation is the UFC’s fault because I felt like they knew it was happening. They went ahead and got [Georges St-Pierre] to fight anyway. I feel like everyone knew Georges wasn’t going to defend the belt. I don’t blame him at all. He came back, got the win, won another title, got paid and gets out. I don’t blame him at all. I blame the UFC because they made the match-up. GSP knew what was up. He’s a smart guy. He got in there, got paid and got out. That’s awesome.” — Kelvin Gastelum speaking to FloCombat.

It’s been a long 18 months of fighting, training and fighting again and again. I guess I should have taken those 18 months off ,instead to get a title fight.

With St-Pierre leaving the division and Bisping on the verge of possibly retiring, middleweight has cracked wide open. Kelvin Gastelum can’t do anything about Rockhold getting the next shot, but he’s still in a great situation. The bright side is that if Gastelum doesn’t want to wait to fight the winner of the UFC 221 main event, we may be able to get him against Yoel Romero, which will be a solid #1 contender match-up. Either way, Gastelum is definitely in the title talk.