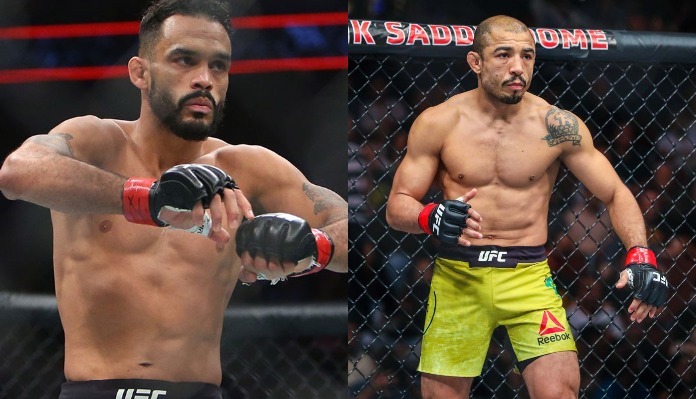 Aldo (30-7 MMA), the promotions former featherweight kingpin, will enter the contest on a two-fight winning streak. The MMA legend has scored impressive unanimous decision victories over Pedro Munhoz and Marlon Vera in his most recent efforts.

Round one begins and Font leaps in with an early jab that lands. He comes over the top with a right hand. He switches stances and continues to press the action. Jose Aldo with a nice kick to the body. Rob Font answers with a hook to the ribs. Another kick from Aldo lands. Font lands a low kick and then shoots in and scores a takedown. Jose quickly scrambles back up to his feet but Rob is still all over him. He lands a nice jab and then a right hook. Aldo attempts to clinch but eats an uppercut. More punches in bunches from Rob Font. He lands a nice standing elbow as the King of Rio attempts to slip out of the pocket. Low kicks now from Font, he circles out. Jose Aldo leaps in with a right hand that lands. One minute remains in the opening round. Font goes to the body with a big punch. He follows that up with a straight right. Aldo answers with a big right that drops Rob. He jumps all over him with ground and pound but the horn sounds to end round one.

Font is able to secure an early takedown on Aldo! #UFCVegas44 pic.twitter.com/gyiJ4BVEZH

Round two of the UFC Vegas 44 main event begins and Rob Font appears to be ok as he is quickly back to work with a heavy volume of strikes. Jose Aldo connects with another big right and once again Font is reeling. This time he stays on his feet but the former featherweight champion smells blood. He is pressing forward now and just misses with a uppercut. Rob responds with a pair of good jabs. Aldo counters with a hard right of his own. He clearly owns the power advantage. Font rips the body and then lands a low kick on the exit. One minute remains in round two. Jose Aldo with a crisp jab up the middle. He goes to the body and then lands another hard jab. Font leaps in with a final flurry and connects with a left. The horn sounds to end round two.

Round three of the UFC Vegas 44 headliner begins and Jose Aldo starts things off by landing three heavy low kicks. Rob Font enters the pocket and the fighters trade punches. Aldo with another chopping low kick. He has finally pulled that out of his arsenal. Font shoots for a takedown but Jose defends and winds up on top. He moves to mount but Rob quickly scrambles back to half guard. The former featherweight champion looks to posture up and land a elbow. Font is able to scramble and get back to full guard. That only lasts a second as Jose Aldo quickly advances his position. Font scrambles back to his feet and lands a pair of punches. Aldo’s right eye has some serious damage. It appears to be swelling shut. Font rips the body with a pair of punches. Aldo returns fire with a jab. He lands a right hand and then drops Rob Font with a low kick. The American is back to his feet but Aldo slams him with another low kick. Rob gets off a decent combination to end round three.

Round four of the UFC Vegas 44 main event begins and Rob Font comes out firing. Jose Aldo lands a huge right hand followed by a flying knee. Font goes down. Aldo jumps on him in side control and lands a big elbow. He advances to full mount, but Font quickly scrambles and gets back to full guard. That was a big escape. Two minutes remain in the round. Rob is landing some good elbows from the bottom but Aldo controls and ends the round on top.

The fifth and final round of the UFC Vegas 44 main event begins and Rob Font knows he needs a finish here. He comes out swinging and lands some good shots on Jose Aldo. He leaps in with a knee but then gets countered by a hook from the Brazilian. Font forces the clinch and presses Aldo against the cage. The fighters break and Font lands a nice elbow. That appeared to wake Jose up as he is now the one pressing forward. Once again the fighters clinch but this will likely work just fine for the former featherweight champ. Font with a big uppercut. Aldo answers with a right hand and then a knee. Rob goes down and Jose jumps all over him. He’s on his back with two minutes to work. Jose Aldo is looking to lock in a rear-naked choke. It looks like he might have it. Font escapes and survives. What a fight!

Who would you like to see Aldo fight next following his victory over Font this evening in Las Vegas? Share your thoughts in the comment section PENN Nation!