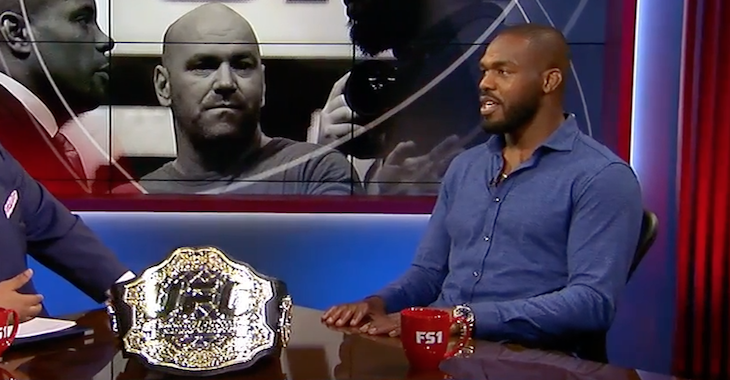 Jon Jones may be dealing with a potential two-year USADA suspension for two failed tests leading into UFC 200, but that hasn’t stopped the 28-year-old light heavyweight kingpin from thinking big.

Jones commented on a potential superfight with heavyweight champion Stipe Miocic, who just knocked out Alistair Overeem on Saturday at UFC 203.

‘Bones’ has teased a move to heavyweight for years, and indeed he has the frame to fill in to one. at 6’3 with a reach that rivals most UFC heavyweights, the idea isn’t so farfetched, according to Jones himself.

“I’m starting to realize the hype is real with that guy,” Jones wrote. “He’s legit.

“It would be the challenge of a lifetime.”

Jones is still sorting out his situation with USADA, which could keep him out of competition until 2018. The former champ and current interim champion most recently defeated Ovince Saint Preux back at UFC 197 by decision before testing positive twice for banned substances leading into his UFC 200 rematch with longtime rival Daniel Cormier, who currently holds the 205 pound belt.

What do you think of a fight between Jones and Miocic?  Do you see Jones going to heavyweight before his career is over? Sound off in the comments section, PENN Nation!