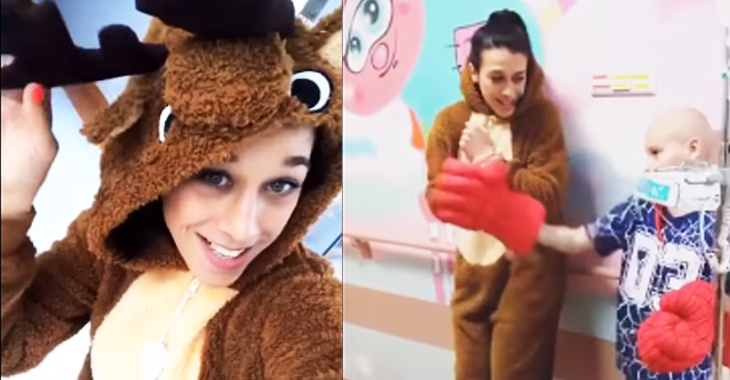 There’s so much trash talk in MMA. Between all the social media jabs and competition-fueled drama, sometimes it’s a welcome change of pace to see some super sweet news. Joanna Jedrzejczyk is no stranger to philanthropy or making her time available to fans. She was even shooting hoops with some neighborhood kids before UFC 217. Just yesterday though, she did something very special. Dressed up as Rudolph the Red-Nosed Reindeer, the former UFC strawweight champion paid a visit to children in the cancer ward.

“I left my family, my fiance, my friends. I left my everything in Poland, but I’m trying to be the best in the world, and I’m proving that every single day for myself. There are no excuses. […] When [I retire] I’m going to be the perfect wife or perfect mother. I want to be the same, [giving] 100 percent. I know I’m not retiring in two months or beginning of the next year because then I will want to come back and have a fight with someone who is important. My goal is to make my dreams come true, my goals come true, and be undefeated. Fight for the next few fights and then see what’s going to happen. That’s my goal.” — Joanna Jedrzejczyk speaking to MMA Junkie before UFC 217.

Joanna Jedrzejczyk has been open about eventually retired and starting a family, vowing to give all of herself just as she’s done in combat sports. It’s easy to see that these aren’t just empty words. Jedrzejczyk works hard to use her success to give back. It’s a joy to see her have fun and bring smiles and laughs to children’s faces as she flops around in a reindeer suit, even giving them a few striking pointers.