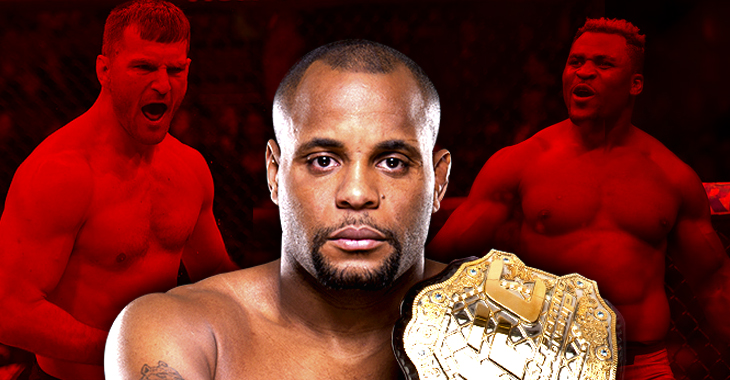 Francis Ngannou is one fight away from fulfilling the prophecies of being the next big thing. He’s scheduled to fight Stipe Miocic for the UFC heavyweight title in Boston on January 20th. Coincidentally, on the same card as Daniel Cormier’s title defense against Volkan Oezdemir. Aside from one loss and one no contest to Jon Jones, DC is perfect in his career, both at light heavyweight and heavyweight. As his career reaches its peak and cuts get harder, Cormier could go back up to heavyweight to end his career with a bang. This could set up one of the biggest fights in UFC history.

“It would be the most amazing thing in the world [to challenge the UFC heavyweight champion as my final fight], but that would take some thinking, some talking and a real solid plan to try to get back to the type of weight that I would need to compete against [Stipe Miocic or Francis Ngannou]. Because, again, I’m not going in there to lose and say I gave it my best shot. If I go in there with Miocic or Ngannou, I’m going to win. That’s just who I am. So that would just be me and my team really coming up with a solid plan on how I’m going to get up to a healthy, strong, 245, 235, 240 pounds to go and fight those dudes.”

The war of GIANTS is coming to Boston on January 20th🔥🔥🔥.

“Even if I did heavyweight again. I feel like at heavyweight, at my best, I was only fighting around 235, so I’d have to get 235 and real healthy and strong. I still feel like [my fight with Josh Barnett] is one of my greatest performances to this day. I still think for all the fights that I had – I fought very well against Dan Henderson, I fought very well against Alexander Gustafsson – I still feel like that’s one of my best performances.” — Daniel Cormier speaking to MMA Junkie radio via Fernanda Prates.

If you remember, there was talks of Jon Jones moving up this year to fight Stipe Miocic for the UFC heavyweight title. A possible superfight that was roadblocked by a possible anti-doping violation. It looks like Daniel Cormier might be able to take that spot as Jones ‘disqualified himself from competition’ again. Maybe the UFC had a similar plan as well. After all, eagle-eyed fight fans may have caught Miocic and Cormier staring down in the EA Sports UFC 3 teaser. First though, Daniel Cormier will have to get through Oezdemir while Miocic and Ngannou settle who the baddest man on the planet really is.

Thanks @EASPORTSUFC 3 for getting me crazy hyped for fights based off of video game staredowns. @stipemiocicufc vs @dc_mma at heavyweight? 🔥 pic.twitter.com/B37Xckc0ta