That news comes courtesy of ESPN, who reported that Jedrzejczyk (16-4 MMA) and Zhang (21-3 MMA) have verbally agreed to throw down at June’s UFC 275 event in Singapore.

The pair first met back at UFC 248 in March of 2020, with Weili Zhang emerging victorious by way of split-decision in a thrilling “Fight of the Year” performance. 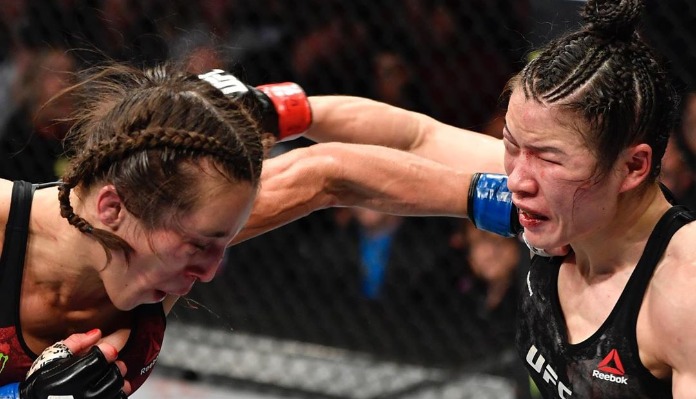 Joanna Jedrzejczyk has not competed since suffering that defeat but recently expressed her desire to get back in the Octagon.

“Everyone thinks I’m not in the UFC anymore. I am, I just dropped out of the ranking, because I haven’t fought for a dozen or so months, but I’m coming back and fighting number one. It will probably be Weili Zhang. I thought it might be Carla Esparza, but it’s already confirmed that she is next for the championship.”

As for Weili Zhang, UFC 275 will serve as an opportunity to rebound, this after suffering back-to-back losses to reigning strawweight champion Rose Namajunas.

‘Magnum’ was KO’d by ‘Thug Rose’ in their first encounter at UFC 261, dropping her 115lbs title in the process. The strawweight standouts collided again at UFC 268, but once again it was Namajunas getting her hand raised, this time by split-decision.

In addition to Joanna Jedrzejczyk vs. Weili Zhang 2, UFC 275 will feature a pair of title fights. In the main event of the evening UFC light heavyweight champion Glover Teixeira will look to earn his first career title defense when he takes on challenger Jiri Prochazka. In the co-main event of the evening, UFC flyweight champion Valentina Shevchenko will look to continue her string of successful title defenses when she squares off with Taila Santos.

Who do you think will win the rematch between Joanna Jedrzejczyk and Weili Zhang?