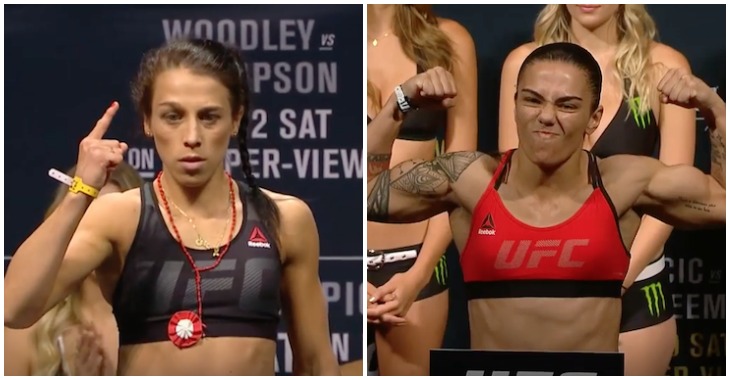 Last month, we learned that dominant UFC strawweight champion Joanna Jedrzejczyk had returned to American Top Team to begin training for her next fight. Her opponent for this next fight, however, remained a mystery.

On Saturday night, that changed. Though it was widely speculated that the next strawweight title shot would go to Michelle Waterson, who recently burst into contention with a quick win over Paige Van Zant, that shot will instead go to Brazil’s Jessica Andrade, who won big on the main card of the UFC’s latest trip to Houston.

Andrade scored her big win over former Invicta Fighting Championships strawweight queen Angela Hill, who was making her long-awaited return to the Octagon. The Brazilian earned this win with a unanimous decision after three fun rounds of action. Andrade’s title shot was confirmed by UFC President Dana White shortly after the event wrapped up.

“Absolutely [she will get the next title shot],” he said. “When you see the way she fought tonight, just imagine [Andrade and Jedrzejczyk] squaring off in there and the absolute war that will be. That’s going to be a fun fight.”

White went on to compliment Andrade and Hill for their exciting scrap, which earned both fighters $50,000 Fight of the Night bonus checks.

“In the women’s divisions, that’s one of the greatest fights you’ll ever see,” White said. “I mean, that fight was incredible. Both girls were getting hit with bombs. What a great fight.”

Andrade will enter her fight with Jedrzejczyk on a three-fight win-streak, having TKO’d Jessica Penne, submitted Joanne Calderwood and now, defeated Hill since dropping from bantamweight to strawweight. She has an overall record of 16-5.

Jedrzejczyk, on the other hand, is 13-0 in sum. Since winning the title with a second-round TKO of Carla Esparza, she has defended it against Jessica Penne, Valerie Letourneau, Claudia Gadelha, and Karolina Kowalkiewicz.

How do you think this Joanna Jedrzejczyk vs. Jessica Andrade strawweight title fight will go? Sound off, PENN Nation!