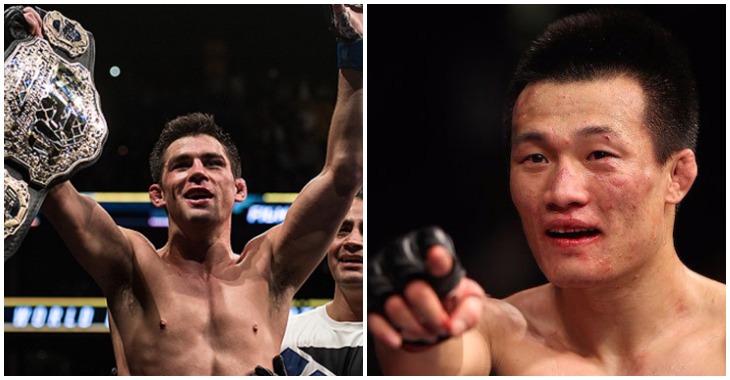 Last night, in the main event of the UFC’s latest trip to Houston, fan favorite featherweight Chan Sung Jung – better known by his monicker “The Korean Zombie” – stepped back into the cage after a hiatus of more than three years. He did so against long-time featherweight contender and Ultimate Fighter runner-up Dennis Bermudez.

Despite his long time away from the cage, the Korean Zombie looked incredible in his anticipated comeback fight, baiting his foe into a brawl, where he ultimately clubbed him with a beautifully-timed uppercut for a first-round knockout win. The ring rust that so many worried he’d have to cope with was nowhere to be seen.

Shortly after his thrilling return to action, the Korean featherweight took to Twitter to explain his apparent lack of ring rust. Apparently, he drew inspiration from some comments from former bantamweight champion Dominick Cruz, who famously returned from a similarly long layoff to reclaim the bantamweight title in early 2016.

Cruz has said on many occasions in the past that ring rust is not a real thing, and that any perceived ring rust is actually just mental weakness.

“I tried to explain there’s no such thing as rust,” he said shortly after reclaiming the bantamweight title in early 2016. “How much have I said that? There’s only rust if you don’t train enough. Remember, ring rust is nothing more than mental weakness.”

The Korean Zombie, apparently, took these words to heart.

@DominickCruz The things that you said in your press conference about ring rust really inspired me. Thank you!

With this defeat of Bermudez, the Korean Zombie rebounds from a 2013 loss to featherweight champ Jose Aldo. Prior to that loss, he was on a three-fight streak, tapping Leonard Garcia, knocking out Mark Hominick, and defeating Dustin Poirier in one of the best fights ever.

What did you think of the Korean Zombie’s return to the cage? Did he prove ring rust isn’t a real thing? Sound off, PENN Nation!