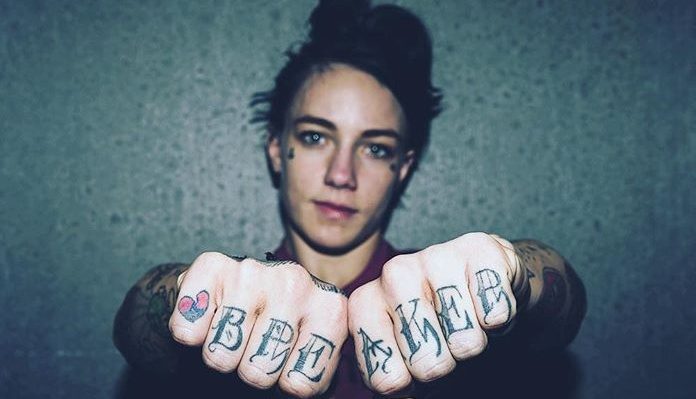 Rather than being granted the spotlight, some fighters have to force their ways into it. And often times they’ll have to break a few hearts along the way.

A prime example of an MMA heartbreaker is Australia’s own, ‘Jessy Jess’ Jessica-Rose Clark. And no that’s not just because she has it tattooed across her knuckles.

When a future or possible star talent builds their hype, depending on the truth to their potential, they may need to be fed some opponents to help build the perception. In ways, Clark has been used multiple times in this light only to shatter the dreams of the one that was ‘supposed’ to win.

After starting a career at featherweight and quickly dropping to bantamweight after two fights, Clark has now found her footing in the 125-pound flyweight division where she currently rides a two-fight winning streak(three overall with the two having come in the UFC).

Her UFC debut came against The Ultimate Fighter season 20 veteran and fellow Aussie, Bec Rawlings who was making her return to the division. Obviously, Clark did her thing and spoiled the start of Rawlings’ hopeful revitalization in a new division.

Having fought essentially non-stop since March 2017, Clark finally needed a break after her last fight in January. No pun intended.

“Going into that last fight with Paige [VanZant], I think when I worked out I had done like nine weight cuts or something or 18 months and my body had had enough.” Clark told BJPenn.com, “Especially cutting so much weight for my debut fight on 10 days [notice] and I think I had about six weeks between those two so obviously spending a week back home after my debut and eating normally then coming back and having to start all over again after that fight, my body just shut down. My immune system wasn’t havin’ it anymore. My metabolism was all f*cked up.

I spent a lot of time resting and doing a few things to take care of myself and get everything back in working order. Then when we got this Jessica [Eye] fight I was already in better condition than what I’ve been for probably my last six or seven fights now.

This camp’s been something I haven’t experienced before because I’ve gone into it at full health and I’ve been fighting back to back for so many years now I don’t feel like I’ve ever been at full health going into a camp.”

Now feeling better than ever after another successful heartbreaking, a high-profile one at that, when she defeated Paige VanZant, Clark is primed and ready to smash through whoever she has to on her path to a title shot.

“Honestly, I want the title shot for sure, but I’m also happy to kind of go the Jessica Andrade route and just go through everyone above me to get there. I really want to make my mark and make a stand and have a justified case why I deserve to fight for the title. So no matter how it goes down I’m not really concerned, I know I’ll get there one way or the other.

A true dark horse in her weight class of 125 pounds, the #9 ranked contender, Clark has her sole focus on herself rather than her opponents which keeps it easy to avoid being distracted by those elements that may surround the person standing across the cage.

This method has worked for many fighters but also worked against them as history shows. Clark, however, continues to make use of it and if it isn’t broken then don’t fix it.

“To be honest I don’t really pay any attention to anything that’s not me. Like even when I’m prepping for a fight, I’m still game planning for myself, not the other person.

In reference to the talk of records is Clark’s next opponent, Jessica Eye who she will be taking on at UFC Singapore on June 23rd.

To some, Eye has overstayed her welcome in the ultimate MMA proving ground as she was 1-5 (1 NC) in her first seven fights with the organization. In January on the same card as Clark’s last time out, Eye returned to her prior home to the UFC, 125 pounds where she snapped a four-fight losing streak with a split decision win.

A notable figure despite her UFC record, Eye is now looking to get on a roll for her first UFC winning streak. Thus making her a perfect opponent for Clark to play spoiler once again.

“[The UFC] offered me [Eye] and they offered me someone who was higher ranked and when I put those two names side by side, the Jessica fight was just there. Promotionally and from a marketing standpoint was a much bigger fight for me. And I think her style mixed with my style is gonna put on a very exciting and entertaining fight which is ultimately what my goal is. Like I want to win for sure but I want to entertain.

That’s one of the reasons I was so disappointed in my last fight with Paige even though I beat her, was that it wasn’t an entertaining fight. I was bummed about that, you know?

There are some fighters that thrive when being overlooked, some that are just fine with carving a path with the bigger names left in their wake until they’re the big name themselves.

With how things have started out for the Syndicate MMA product, Clark, she could very well cement herself as MMA’s ultimate heartbreaker.

She left us with a simple yet perfect prediction for the 23rd.