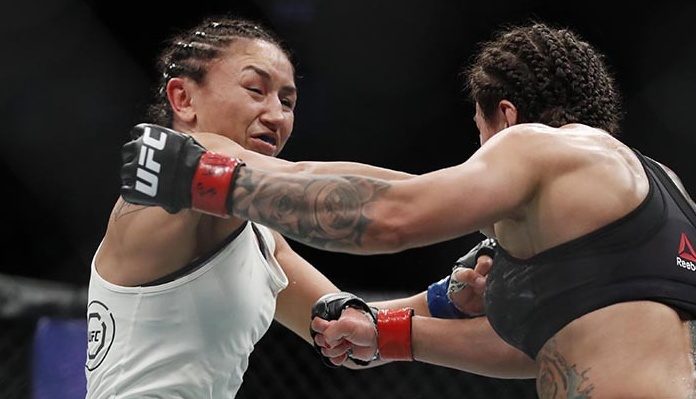 It would seem that new UFC interim welterweight champion, Colby Covington isn’t the only one claiming that their UFC 225 opponent used some illegal tactics mid-fight this past Saturday night.

Having fought in the second bout of the televised portion of the UFC 225 prelims, former UFC strawweight champion, Carla Esparza, like Covington also believes that she fell victim to her opponent greasing during their fight.

Esparza explained her feelings on the MMA Hour today.

“She cheated in the fight, she greased before the fight. I was considering saying something to the referee in between [rounds]. I was going to say, ‘She’s greasing! She’s greasing’, but I didn’t really know how to go about it.

It’s pretty shady to me. I re-watched the fight and my hands were slipping right off. Even when I was trying to grab armbars during the fight my arms kept slipping down. She’s a cheater, but it doesn’t really surprise me. In my opinion, she’s been a pretty dirty fighter throughout, so it is what it is.

I felt that I won anyway. I felt that things could’ve even been more dominant on my side had [she not greased]. Claudia, you’re a cheater, straight up. It’s not cool. It is what it is, but it’s done with.”

Esparza took on Claudia Gadelha in a fight that was years in the making as the two were supposed to clash on two separate occasions prior in Invicta. The two would finally meet on the grandest stage and put on a great and closely contested fight that saw Gadelha earn the nod via split decision.

The former champion continued on about how she regrets not speaking up.

“At the end of the second round, I was going to say something to the ref, but I didn’t and I kind of regret that. I don’t know how I would’ve gone about that. I’ve never been in that situation before.

“I do [regret not telling the referee]. I don’t know if it would’ve made a difference. Maybe they could’ve toweled her off, but I really don’t know. I’ve heard of people doing this over the years. But I never actually experienced it before.”

Following the claims in her interview, Esparza took to Twitter afterward to let it be known she wouldn’t just say this for nothing and then go on to challenge Gadelha to a rematch.

Hey @ClaudiaGadelha_ i was never scared before and I’m certainly not scared now… rematch?@danawhite @Mickmaynard2