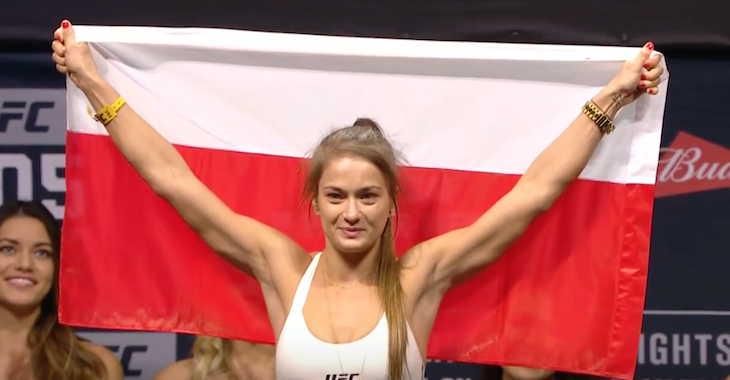 Yesterday afternoon, in the co-main event of the UFC’s exciting stop in Gdansk, Poland, Polish strawweight contender Karolina Kowalkiewicz picked up a nice decision win over former Invicta star Jodie Esquibel. In the wake of this impressive win, Kowalkiewicz made a clever callout of surging Brazilian contender Jessica Andrade.

Speaking at the UFC Gdansk post-fight presser, Kowalkiewicz repeated this callout of Andrade, explaining that it stems in part from Andrade’s previous claims that she avoided a fight with her.

“For the future Jessica Andrade said I declined a fight with her,” Kowalkiewicz explained through her translator. “However, that never happened, and I was never offered a fight with Jessica, so this time, let’s just do it now, if you’re open to do it.”

With this defeat of Esquibel, Karolina Kowalkiewicz bounced back from consecutive losses to UFC strawweight champion Joanna Jedrzejczyk, and long-time contender Claudia Gadelha, who submitted her in the first round. She’s now 11-2 overall. Andrade, meanwhile, recently rebounded from her own loss to Jedrzejczyk with a thrilling defeat of Gadelha. With this win, she established herself as perhaps the next woman in line for the winner of UFC 216’s Jedrzejczyk vs.Rose Namajunas fight. She’s 17-6 overall.

Whether the UFC heeds Kowalkiewicz’s callout of Andrade or not, her immediate plan is to take a little time off.

“Now I need a vacation,” She said, “and after that I want to fight with Jessica Andrade.”

Do you want to see Karolina Kowalkiewicz  fight Jessica Andrade? If this fight gets made, who do you think comes out on top? Join the conversation in the comments section?