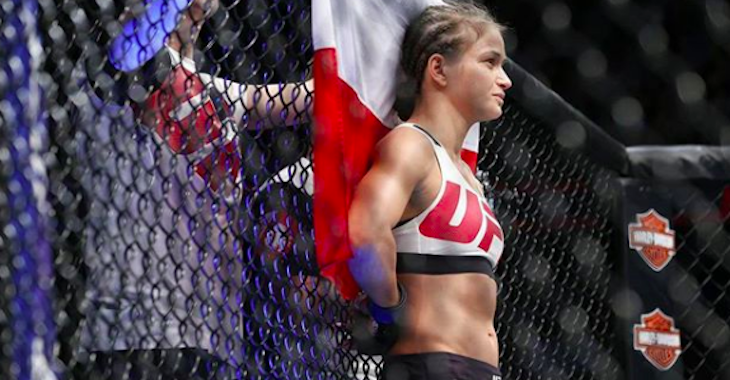 Round two begins and Karolina lands a nice straight right hand. She pushes forward and throws a combination that ends in a head kick. Jodie retreats and circles out. She steps back into the pocket but Karolina greets her with a right hand. She follows that up with a pair of knees. Jodie is moving backwards now and Karolina lands a kick to the body. She leaps in with a right hand that connects. She grabs a hold of the clinch and begins unloading knees from the position. Karolina with an elbow. Jodie pushes her against the cage. They break and Karolina lands another knee. She follows that up with a high kick and then a combination. Jodie clinches up and pushes Karolina back against the cage. The fighters break and Jodie lands a right hand over the top. Karolina responds with a short left hook. Jodie is utilizing a lot of movement now. Karolina shoots in and scores a takedown. She immediately rolls for an armbar. Jodie defends. She begins striking. The horn sounds to end round two.

Round three begins and Karolina gets to work quickly. She lands a stiff combination. Jodie circles out and attempts to work from the outside. Karolina continues to press the action and lands a right hand followed by a knee inside. Jodie comes in with a push kick. She lands a nice left hook. Karolina replies with a double jab. She misses with a spinning kick and then is counter by a left hand from Jodie. More pressure from Karolina. She is like the terminator in there. Karolina with a head kick now and then another. Jodie circles out. Karolina continues to utilize her crisp jab. Round three comes to an end.