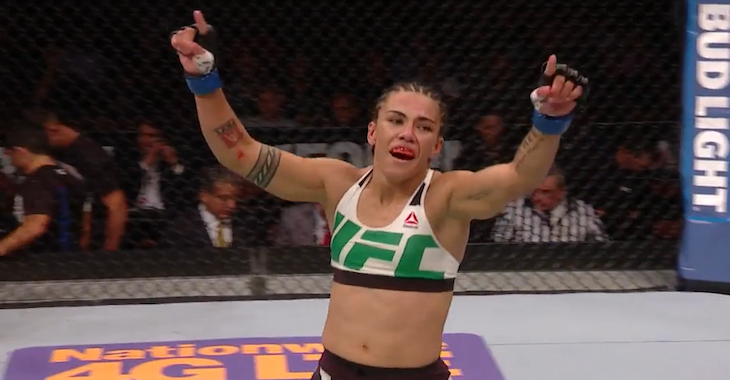 Just a couple of months ago, Jessica Andrade stood across the Octagon from Claudia Gadelha and those two went to war. There was blood, pro-wrestling slams, and epic showings of heart from both fighters. Andrade not only won the decision against the top contender, but earned Fight of the Night honors. Fresh off that incredible performance against Claudia Gadelha, Jessica Andrade has her next fight lined up. As reported by Combate.com, Andrade is slated to fight Karolina Kowalkiewicz on February 24th at UFC Orlando.

“I was expecting more of Karolina [Kowalkiewicz]. I expected her to knock [Esquibel] out, something like that. Her opponent had just gotten into the UFC and she was in the top five. She should have shown more spirit to finish the fight. I think it would be a really good fight [with me and Kowalkiewicz]. That’s what I’m after: tough fights. My goal is to fight those who are at the top to get a chance to fight for the belt. Karolina is a good choice. She was not hurt. She might be able to fight again soon.” – Jessica Andrade speaking to FloCombat.

Both Jessica Andrade and Karolina Kowalkiewicz said they wanted to fight each other and now it’s happening. The two fighters were on impressive win streaks until meeting then-champion Joanna Jedrzejczyk, but when both fighters fought Gadelha, only one was able to win and that was Andrade. Speaking of Jedrzejczyk though, this match-up between top contenders Andrade and Kowalkiewicz all but confirms a rematch between Rose Namajunas and Jedrzejczyk. Of course, nothing official has been announced for that, but it’s hard to see Namajunas defending her strawweight title against anyone else of Andrade and Kowalkiewicz is booked.