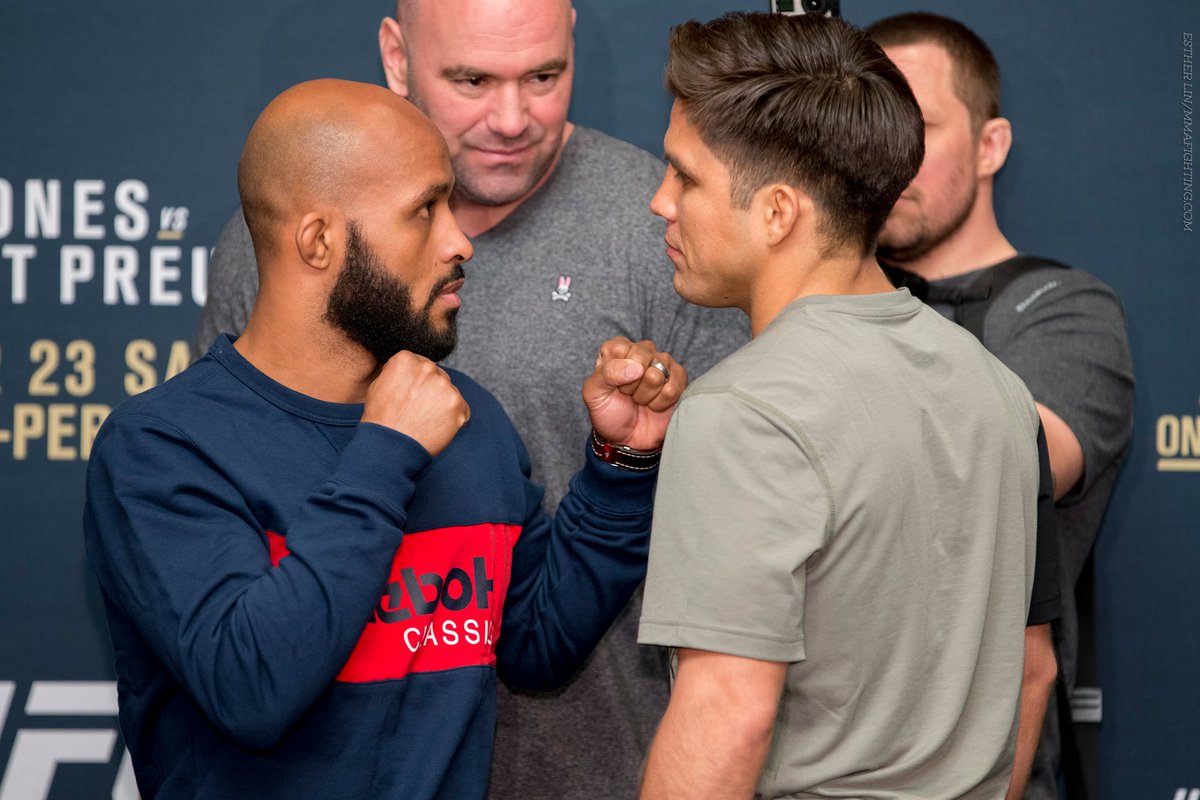 Back in September at UFC 215, former flyweight title challenger Henry Cejudo returned with a vengeance and took it all out on Wilson Reis. He knocked the contender out in the second round to earn Performance of the Night. Not only did he bounce back from recent losses, he looked like he improved drastically and added tons of new tools to his game. The champion Demetrious Johnson said himself that Cejudo’s fight with Sergio Pettis at UFC 218 determines who the No. 1 contender will be, but TJ Dillashaw is pushing a move to flyweight for an immediate title shot. A fight that Cejudo thinks “Mighty Mouse” Johnson wins.

“Hopefully, the winner of this fight [with Sergio Pettis at UFC 218] fights for the belt. I want to fight for the belt. Demetrious [Johnson]. If anything — I don’t know, I don’t mind mind the idea — I can welcome TJ Dillashaw to the flyweight division. You know, I’m not afraid. Cutting down 10 extra pounds to this weight class? It gonna’ be a big difference. I’m a big 125-er and I know what it’s like cut 10-pounds. An extra 10-pounds on top of that. And personally, I think DJ would easily get the win [against TJ Dillashaw].”

“Dude, [Demetrious Johnson] a mixed martial artist, man. As much as I want to say no, the dude is crafty man. The dude is sneaky. But I’ve always felt like I didn’t fight Demetrious Johnson. I didn’t, man. I got beat in a grey area and I really didn’t get a chance to feel him out so much, but watching him I’ve learned so much too. The people ask me, ‘How do you beat Demetrious Johnson?’ The only response I could really think of is just time. You know, when I fought Demetrious Johnson, I was exactly three years from my MMA debut. Fighting MMA. Now, hopefully if the fight goes down in like April, it’d be exactly five years now and that’s a big difference. An addition two years  is a lot of growth for me.” — Henry Cejudo speaking to Ariel Helwani before UFC 218.

If Henry Cejudo gets his way, he beats Sergio Pettis tomorrow night and challenges Demetrious Johnson again for the title while Joseph Benavidez is out recovering from his injury and it’s hard to argue against it. In four years, Cejudo has only been beaten by the UFC flyweight champion Demetrious Johnson and lost a split-decision to Benavidez, who is the constant number two in the division. He’s even willing to give TJ Dillashaw a shot if he manages to take that title from Johnson, although that’s something no one has been able to do since he first won it in 2012.