The Octagon remains in Nevada for tonight’s UFC 276 event, a twelve-bout fight card headlined by Israel Adesanya vs. Jared Cannonier.

Adesanya (22-1 MMA) will be looking to earn his fifth title defense when he takes to the Octagon this evening. ‘Stylebender’ last competed at UFC 271 back in February, where he earned a unanimous decision win over Robert Whittaker.

Meanwhile, Jared Cannonier (15-5 MMA) will enter tonight’s headliner sporting a two-fight winning streak, his latest being a second round knockout victory over Derek Brunson. ‘The Killa Gorilla’ has gone 5-1 over his past six fights overall. 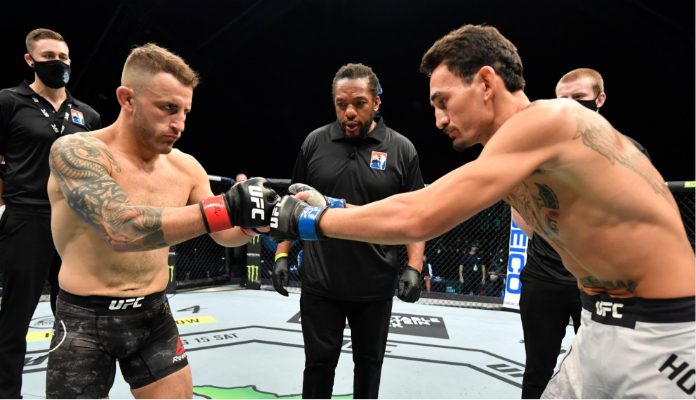 Meanwhile, Max Holloway (23-6 MMA) has won his last 2 fights, defeating Yair Rodriguez (13-3 MMA) and Calvin Kattar (23-6 MMA) respectively. Prior to those matches, ‘Blessed’ lost to Volkanovski at UFC 251 by split decision and at UFC 245 by unanimous decision.

Meanwhile, Alex Pereira (4-1 MMA), a former GLORY kickboxing champion, made his highly anticipated Octagon debut last November at UFC 268, where he scored a sensational knockout victory over Andreas Michailidis (see that here). ‘Po Atan’ followed that up with a unanimous decision win over Bruno Silva back in March.

If that wasn’t enough to get you interested, tonight’s UFC 276 also features the return of Sean O’Malley, who faces Pedro Munhoz in a bantamweight contest.

O’Malley (15 -1 MMA) will enter the contest sporting a three-fight winning streak, this after scoring stoppage victories over Thomas Almeida, Kris Moutinho and Raulian Paiva in his most recent efforts.

As for Pedro Munhoz (19-7 MMA), ‘The Young Punisher’ will be looking to snap a two-fight losing skid when he takes to the Octagon this evening. The Brazilian is coming off back-to-back unanimous decision losses to Dominick Cruz and Jose Aldo respectively.

Robbie Lawler vs. Bryan Barberena – Barberena def. Lawler via TKO at 4:47 of Round 2

Pedro Munhoz vs. Sean O’Malley – Ends in a no-contest

Brad Riddell vs. Jalin Turner – Turner def. Riddell via submission (guillotine choke) at 0:45 of Round 1

Donald Cerrone vs. Jim Miller – Miller def. Cerrone via submission (guillotine choke) at 1:32 of Round 2

Who are you picking to win tonight’s UFC 276 fights? Share your predictions in the comment section PENN Nation!