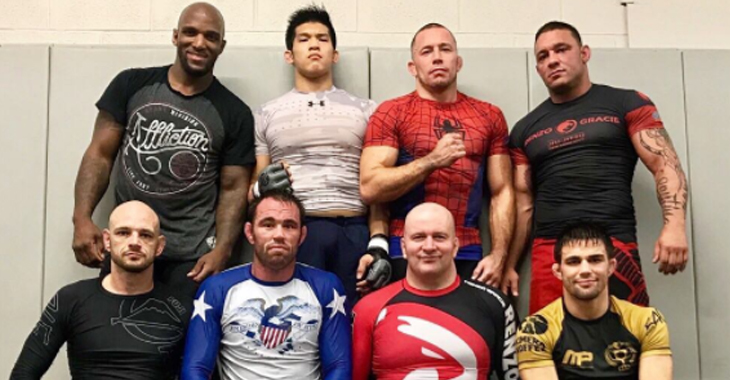 At UFC 129, Georges St-Pierre successfully defended his UFC welterweight title for the sixth time against one of the best grapplers in MMA, Jake Shields. The former Strikeforce middleweight champion has wins over Robbie Lawler, Demian Maia, and even Tyron Woodley, but he wasn’t able to beat St-Pierre that night. Six years later, Shields helped St-Pierre prepare for his huge comeback fight against Michael Bisping. He recently talked in-depth about the match-up from an insider perspective and gave his prediction for the fight.

“[Georges St-Pierre]’s a martial artist, so he’s always trying to grow. He didn’t take four years to just party, film movies and cruise around, he was still training pretty much every day, he was coming to New York, you know, I think he was going out and working boxing as well – actually, I know he had a guy from Toronto who was a boxer, Jorge, was working with him as well. So, he was constantly learning and expanding new skills, so definitely. Plus, he’s bigger now, he’s probably put on 10 pounds of muscle. He’s still going to be smaller than Bisping, but he has that extra weight which should help.”

“I mean, I’ve trained with Georges [St-Pierre] so I’m gonna pick Georges. I think Georges is gonna win the fight, but it’s a tough fight. I’ve trained with [Michael] Bisping as well, and guys underestimate him. I don’t know why everyone always underestimates Bisping. I guess he doesn’t have a lot of single-punch KO power or he doesn’t have a lot of like fast submissions, but he’s like strong, in shape and he wears people down. He just keeps coming and he breaks you. So if Georges has a hard time taking him down and keeping him down, it could be a tough fight. I’ll go with GSP, I guess by decision. I think it’s going to be a tough fight but I think GSP, he definitely has the wrestling advantage, I think on the stand-up they’re pretty even. I think Bisping may be a little bit more high volume and conditioned where he holds the advantage in the size, but overall I think GSP is just so talented he’ll find a way to win.” — Jake Shields speaking to Submission Radio.

There are so many unknowns in this fight: How will Georges St-Pierre look at his new weight? Can Michael Bisping stop the takedown? Does the lighting-fast ramming jab of St-Pierre disrupt Bisping’s infamous boxing? This is a fight that will prove if Georges St-Pierre should’ve stayed retired, or if the made the right call and he’s not just as good, but better than he was. All the questions will be answered this Saturday at UFC 217.