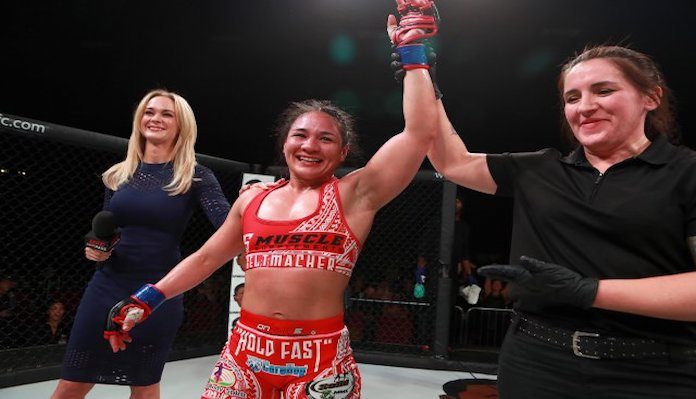 There was a huge mess-up by the Kansas Athletic Commission on Friday night at Invicta FC 36. In women’s flyweight action, Stephanie Geltmacher was originally announced as the victor of her fight against Victoria Leonardo via split decision (29-28, 28-29, 29-28).

Geltmacher conducted her post-fight interview in the winner’s circle, but then the shenanigans started. The commission informed the fighters and Invicta that they calculated the scorecards incorrectly. Instead of Geltmacher winning by split decision, Leonardo was announced as the winner via unanimous decision (29-28, 29-28, 29-28)

Rob Tatum of Combat Press had the official scorecards.

It was an embarrassing situation for all involved, but it hurts Geltmacher the most. Instead of picking up another victory to improve to a perfect 5-0 in her MMA career, she instead lost and fell to 4-1. Leonardo, meanwhile, improved to 6-1.

It is rare for scorecards to be announced incorrectly, but it happens from time to time and can be chalked up human error. For example, at UFC on FX 2 in 2012, Demetrious Johnson was declared the winner by unanimous decision over Ian McCall. The commission later realized they had tallied up the scores incorrectly and that the fight was actually a majority draw. The result of the bout was changed, but it robbed Johnson and McCall of the potential to fight a fourth round as it was a flyweight tournament bout.

Aside from Geltmacher vs. Leonardo, Invicta FC 36 also saw Pam Sorenson defeated Kaitlin Young via unanimous decision in the main event for the Invicta featherweight championship. In the co-main event, Emily Ducote defeated Janaisa Morandin via first-round TKO in a catchweight bout.

But the story everyone is talking about is how the wrong winner was announced when adding up scorecards in an MMA fight should be a fool-proof job.

What do you think commissions can do to ensure this type of situation never happens again?