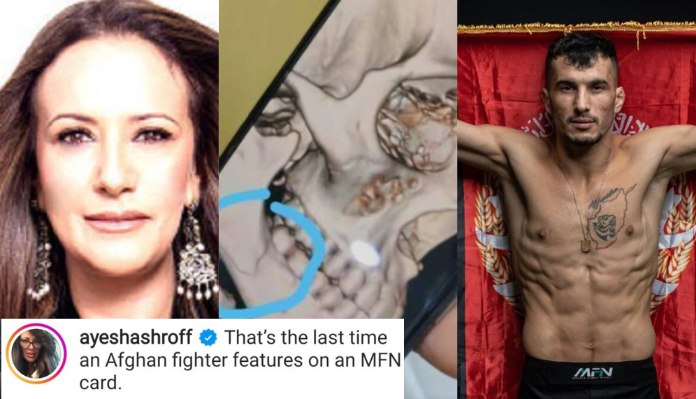 MFN issued a statement saying that fighters from Afghanistan will no longer feature on their cards following unsavoury scenes at Matrix Fight Night 9 on June 24th. The final fight of the night was between New Delhi-based Puerto Rican Seth Rosario and Afghanistan’s Zahoor Shah.

The trouble began when Rosario stopped Shah late in round one. However, the Afghan contingent in attendance thought that the round had already ended due to interruptions when the timer was stopped while the referee was speaking to Shah.

In the furore that followed, Rosario’s teammate Srikant Sekhar was allegedly sucker punched and had his jaw broken by Shah’s countryman Abdul Azim Badakhshi.

Video of the violent mob attack:https://t.co/Tgio1kjauN

Sekhar, who had won his fight earlier in the evening, described the incident in an interview with Lockerroom India.

“I was jumping up and down as Seth was having his fight with Zahoor. Before that I called out Zahoor and told him “F*ck you” in front of all the Afghanis. All Indians shouted and all the Afghanis kept quiet. Then they waited for Seth’s match. Then Seth was beating Zahoor up. I was jumping because he is my teammate. Zahoor was getting beaten up and these guys couldn’t take it as Indian crown started roaring.

At the same time the (Afghan) guys behind me threw bottles at me and I turned back and they were mocking me. Because I think they didn’t like me and at the same time Zahoor was also losing. They couldn’t take it.

Then I ignored that fact and I started cheering for Seth as he was getting the finish and again someone from the crown threw paper garbage or plastic at me and were showing middle fingers and looking at me and pointing me out and mocking me.

I got pissed on this bunch and said them f**k you and flipped back. Then one official caught my hand and was taking me out of cage side. He said “go out of here, this crowd is getting mad at you” and started escorting me out of the ringside.

I was going out with him and out of nowhere, I get sucker-punched by Abdul Badakshi from behind. I didn’t even see him coming neither I knew where he was. He hit me twice and I fell down. As I was on the floor, I saw officials pushing him and covering me up. Then the crowd breaks into the arena and starts stomping me.

The officials and my teammates tried to protect me and they got beaten in the process. They told me to get away from the crowd. I went out and my team mate told me to run because there were 70, 80 people running behind me.

They (the Afghan contingent) were chasing me with bricks and rods for a kilometer. Near the exit there was a cop car, I jumped into the car and they threw bricks on the car and spit on me. They even hit the car. Then the police car somehow escaped the mob and I was saved.”

In the wake of the brawl, Matrix Fight Night issued their statement declaring all Afghan fighters banned for life.

Abdul Azim Badakhshi had arguably been the biggest star in the promotion. The Brave CF veteran is 13-4 and had back-to-back wins on the previous two Matrix Fight Nights. ‘The Afghan Lion’ is now said to be attempting to flee the country using a false documents.

Afghan MMA fighter Abdul Azim Badakshi holding two passports, Afghani and Indian and having made an Aadhar card (god knows how) is attempting to flee tonight…not sure if FIR has been filed yet by @DelhiPolice am being told same is being done under bailable offences pic.twitter.com/kIQVUIFxJp

Badakhshi’s involvement is made all the more shocking due to his alleged romantic involvement with Krishna Shroff. The Shroff family are famous in India and run Matrixk Fight Night. It was also Krishna’s mother Ayesha who made the statement banning Afghans.

MMA is currently banned in Afghanistan, and while the likes of Javid Basharat and Nasrat Haqparast are able to ply their trade in the UFC, the incidents at MFN appear to have closed the door on fighters from the middle eastern country competing in India with several other promotions reportedly following along with MFN’s ban.

What do you make of what went down at MFN 9?