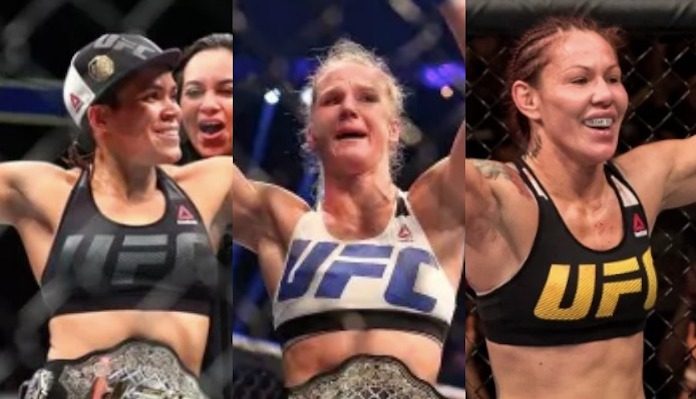 With this victory, Holm effectively established herself as the number-one contender at both featherweight and bantamweight. She’s one of the only options available for featherweight champ Cris Cyborg, and one of the few top bantamweights left that bantamweight champ Amanda Nunes has not yet fought. It really seems to come down to which division she’d prefer to fight for the title in first.

From the sounds of it, Holm would prefer a shot at the bantamweight title in her next bout. Luckily for her, Nunes seems to be very receptive to the idea.

Shortly after Holm’s defeat of Anderson, Nunes took to Twitter to call the former champ.

Let’s do it @HollyHolm

“Let’s do it [Holly Holm]” Nunes said in a short but sweet Tweet.

Holm’s returning to the bantamweight division for a title fight with Nunes would seem to deprive Cris Cyborg of the best option for her next title defense. However, Cyborg seems very interested in seeing Nunes and Holm fight — and then battling the winner in a featherweight title superfight.

The featherweight champ chimed in on Twitter shortly after Nunes called out Holm.

Both these girls beat @RondaRousey. I want to know who wins against each other and can fight the winner of @Amanda_Leoa V @HollyHolm in a REAL SUPERFIGHT https://t.co/RTgEPOKRlD

“Both these girls beat [Ronda Rousey],” Cyborg said on Twitter. “I want to know who wins against each other and can fight the winner of [Amanda Nunes] v. [Holly Holm] in a REAL SUPERFIGHT.”

Cyborg last fought in March, authoring a first-round destruction of Yana Kunitskaya. This win was preceded by a competitive decision defeat of Holm. Nunes, meanwhile, last fought in May, in the main event of UFC 224, where she defeated Raquel Pennington by TKO.

Which of these champions would you prefer to see Holly Holm battle next?