Kamaru Usman is closing in on the record for most consecutive wins at welterweight, which is currently held by mixed martial arts legend Georges St-Pierre.

Usman (16-1 MMA) is currently riding a fourteen-fight win streak, which has seen him capture and now defend the UFC’s coveted welterweight title.

‘The Nigerian Nightmare’ took home that UFC’s welterweight strap early last year at UFC 235, this after he dominated Tyron Woodley on route to a unanimous decision victory.

Most recently Kamaru Usman successfully defended his throne for the first time by scoring a fifth round TKO victory over bitter rival Colby Covington at last month’s UFC 245 event in Las Vegas.

While Usman has a long way to go before threating Georges St-Pierre’s welterweight record of nine consecutive title defenses, he is not far from leaping ‘GSP’ in the consecutive wins department. 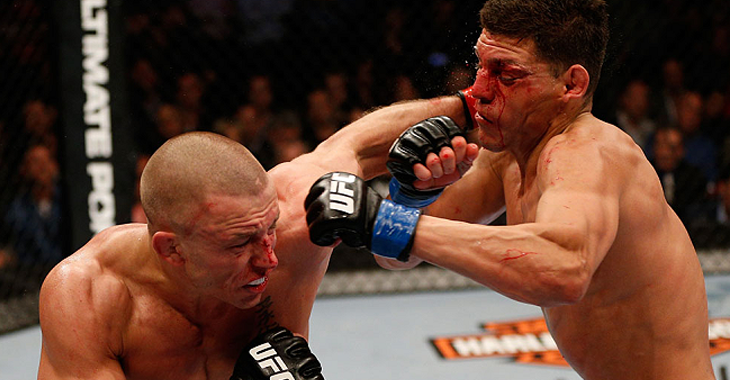 St-Pierre put together a stretch of twelve consecutive UFC welterweight wins over the course of December 2007 until November of 2013 when he last competed in the division.

Kamaru Usman is currently riding an eleven fight win streak in the promotions welterweight division and if he has it his way, when it comes time to break St-Pierre’s record, he wants to do so against the Canadian himself.

“2020, the only thing that makes sense, I’m right there about to break the record for most consecutive wins (at welterweight) and I’m the champion,” Usman explained to MMAFighting. “The guy that holds the record, the guy that’s just above me, is Georges St-Pierre. It’s only right that I break that record on Georges St-Pierre.”

Before that record-setting fight with ‘GSP’ could happen, Usman will first have to pickup another victory to tie the Canadians record.

‘The Nigerian Nightmare’ does have options for his next contest, including surging division contenders Leon Edwards and Jorge Masvidal.

Who do you think would win if Georges St-Pierre and Kamaru Usman squared off for the UFC’s welterweight title? Sound off in the comments section PENN Nation!