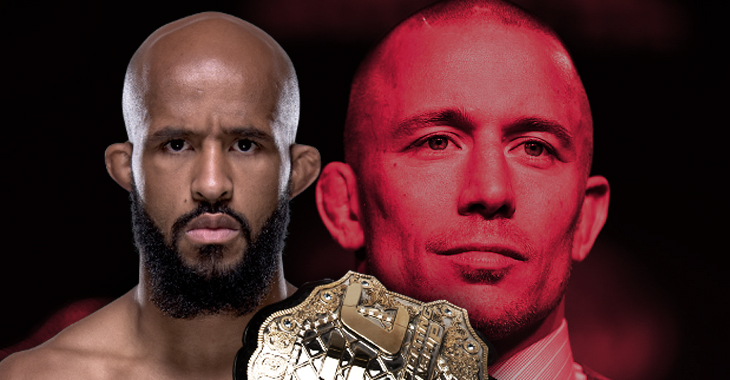 Demetrious Johnson is one win away from breaking Anderson Silva’s title defense record, the only man who stands in his way is Ray Borg. What “Mighty” Johnson has accomplished so far is unheard of in a sport where it’s usually very difficult to win consistently. For instance, in the heavyweight division, no champion in the history of the UFC has ever defended the heavyweight title three times in a row. If Demetrious Johnson beats Borg, he’ll have defended his title 11 times. Georges St-Pierre, former UFC welterweight champ and GOAT candidate, recently took time out to give Johnson some recognition.

“Becoming champion is hard, but staying champion is even harder.” The legend @GeorgesStPierre w/ some words on @MightyMouseUFC #UFC215 pic.twitter.com/DINPuYF4OZ

“Becoming champion is hard, but staying champion is even harder. Now, Demetrious Johnson is the best fighter competing in mixed martial arts today. And he’s on the point of breaking the record for the most consecutive wins in UFC history for the title. So, be aware and I can’t wait to see what’s going to happen. Good luck.” — Georges St-Pierre.

Georges St-Pierre stepped away from the sport on a 12-fight win streak. Demetrious Johnson will have been undefeated for 13 fights if he comes out victorious at UFC 215. Will he move up in weight for a more difficult challenge, or will he stay at flyweight to just see how long he can last? Either way, Johnson is a special type of athlete and we are fortunate to be able to witness him reach his peak in our lifetimes.

“I was always a big fan of Anderson Silva. He was a true martial artist. I remember when he set this record. I was like, ‘Oh my God, he’s at 10. No one is ever going to get 10 consecutive title defenses.’ Here’s little old me, the first-ever flyweight champion. I’m the only fighter to ever hold this belt. I’ve submitted people, I’ve KOed people, I have won seven bonuses. If I am able to go out there and win this fight, I’ll be the longest reigning UFC champion ever in history. There are a lot of champions who get the belt and are unbeatable and next thing you know, they get beat. Every single time you step in the Octagon, you have to be on.” — Demetrious Johnson to CBS Sports.

“GSP and Anderson Silva were great champions, but I’m the best to ever step foot in this Octagon.” @MightyMouseUFC#UFCKansasCity pic.twitter.com/1hIfZZ6IZI