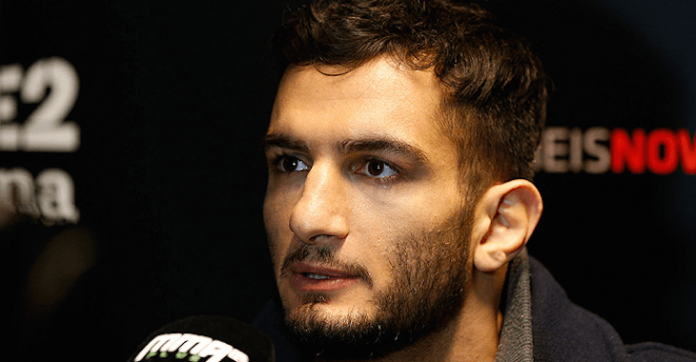 The victory marked Mousasi’s third in a row, as he had previously scored victories over Thiago Santos and Thales Leites respectively.

The Armenian spoke about always being an underrated fighter at last night’s UFC 204 post-fight press conference.

“I think I’m underrated throughout my whole career. I don’t know,” Mousasi stated. “Maybe I’m from Holland, people don’t care, but I don’t know. Maybe throw some bottles at someone’s head and then people gonna notice me.

The fight that followed Mousasi’s beat down of Belfort was a rematch between Dan Henderson and Michael Bisping for the UFC’s middleweight championship.

Bisping emerged victorious via a close judges decision last night in Manchester and Gegard spoke about how a potential fight with the brash Brit would go down should they ever meet.

“I fight Michael Bisping,” he said. “With his performance tonight, I like Bisping, but, you guys know I can beat him. I would beat Michael Bisping. I would jab his face the whole night. Easy.”

Mousasi continued by saying that for some reason Anderson Silva keeps stealing his fights.

“I was scheduled to fight [Bisping], but somehow Anderson Silva show up,” he said of the UFC Fight Night 84 bout in February of 2016. Mousasi and Bisping were originally slated to face off, but UFC management went another direction, giving Silva the bout against the Brit.

“He took my fight,” Mousasi claimed. “I was supposed to fight DC. I was ready, I was able to go five rounds. It was me or Anderson Silva at that moment,” he said, noting he was in the running to face Daniel Cormier at UFC 200 after Jon Jones was removed from the card last minute.

“There weren’t other guys to choose from, so Anderson Silva having come from operation, laying on his couch, they woke him up, give him some medical tests and they give him the title shot. He wasn’t able to go five rounds, so he chose to give three rounds and he was just happy holding on for three rounds just to survive. So, in that time, I deserve to fight for the belt if it was me and Anderson.”

Mousasi remains hopeful that he will get a top contender fight next, if not handed current champ Michael Bisping.

Who would you like to see Gegard Mousasi fight next? Sound off PENN Nation!