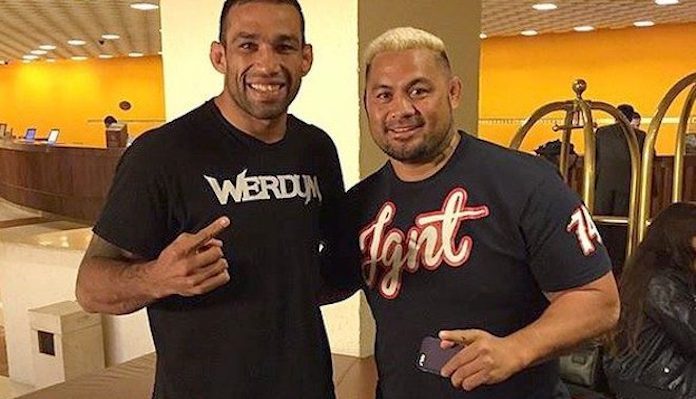 Earlier this week, we learned that former UFC heavyweight champion Fabricio Werdum had been handed a two-year suspension by the United States Anti-Doping Agency (USADA). This suspension stems from an out-of-competition urine test, in which Werdum tested positive for Trenbolone and its metabolite Epitrenbolone.

Shortly after Fabricio Werdum’s suspension was announced, his former opponent Mark Hunt, one of MMA’s most vocal steroid critics, issued a scathing reaction.

“I’m glad that Fabricio Werdum got caught, that little b*tch,” Hunt told MMAJunkie ahead of his UFC Moscow fight with Alexey Oleynik, who was originally supposed to fight Werdum. “Go back to the favelas. F*ck you, you little c*nt. Good job. He was supposed to be here, but that’s what you get for being weak. That’s what you get, Fabricio, for being a weak-minded person. See you later.”

“They pulled me from the Sydney card, he took my place. That guy kneed me in the head in Mexico, I had to lose 21 kilograms in three and a half weeks to make that a title fight. I got kneed in the head by that little cheater. Then he beats Cain [Velasquez] in Mexico. That really upsets me about that guy. Then he wouldn’t fight me…he’s just a cheating little b*tch, man. He’s a little dog, that guy. See you later, Fabricio. Enjoy, motherf*cker.”

Fabricio Werdum has not taken kindly to Mark Hunt’s comments about him.

In the comments section of a recent Instagram post, Werdum went after Hunt, promising to knock him out when they next cross paths. This prompted an absolutely classic response from Hunt.

See a screen shot of their interaction below (via Desmond Madden of MiddleEasy).

“You’re not following Daddy on Instagram,” Werdum said to Hunt. “When Daddy sees you I’m going to knock you out again.”

“Daddy doesn’t have a job anymore because daddy sticks needles in his stupid ass,” Hunt said in his emoji-laden reply (edited for clarity). “Enjoy working at the petrol station you f*ckrat.”

Needless to say, Mark Hunt and Fabricio Werdum don’t seem to be fond of each other.