Prior to his highly anticipated return to the cage, Rory MacDonald sat down with BJPENN.com’s Chris Taylor to discuss his upcoming scrap with Daley.

“Camp is going really well. I split my training camp between Montreal at TriStar and back home in B.C. (British Columbia) where I started at Toshido MMA. That is where I am at this present time.”

Taylor asked MacDonald if it was safe to assume that he plans on utilizing his grappling skills against Paul Daley, who is best known for his abilities as a striker.

“Yea absolutely I want to test out his wrestling and his ground game in general. With that being said, I don’t feel like it is going to be a bad thing for me if the fight stays standing. I like my chances on the feet as well.” 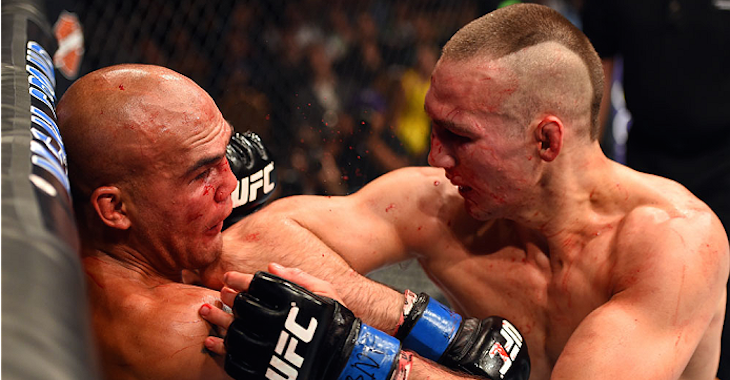 Rory MacDonald believes he will fight for a Bellator title in his next outing, this after he knocks out Paul Daley in London.

“I will get my title shot right after I go out there and knock out (Paul) Daley.”

“With that said, I don’t see a submission being out of the picture either. I feel like I have good chances of finishing the (Daley) fight with strikes or a submission.”

Rory MacDonald was last seen in action at UFC Fight Night 89 last June in Ottawa, Ontario, Canada where he suffered a decision loss to Stephen Thompson.

The Canadian welterweight standout has a professional record of 18-4 overall and holds notable wins over Tyron Woodley, Demian Maia, BJ Penn and Nate Diaz during his young career.

How do you think the Macdonald vs. Daley fight will play out at Bellator 179 on May 19 in London? Sound off PENN Nation!