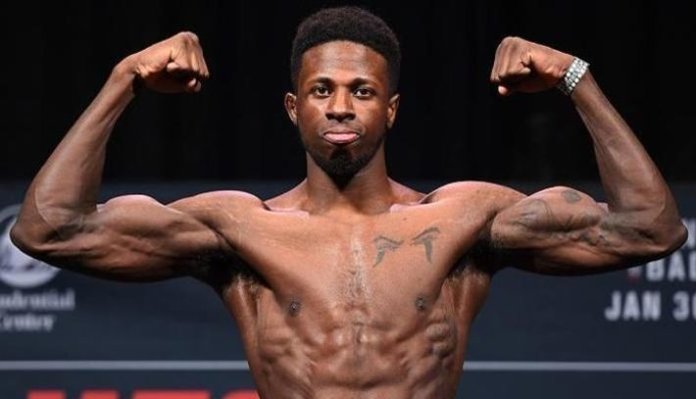 Randy Brown wanted to get another fight in this year and he jumped at the chance to take a fight at UFC Vegas 39 against Jared Gooden.

Brown is coming off a submission win over Alex Oliveira at UFC 261 and many thought he would get another high-profile name. Yet, that isn’t the case as he will battle Jared Gooden in the co-main event of UFC Vegas 39. For Brown, he says he just wanted to fight and this was a chance to get back in there.

“It’s a short-notice fight, I was in preparation as I had planned to fight another person but he wasn’t available,” Brown said on Just Scrap Radio on BJPENN.com. “I wasn’t sure if I was going to fight this year and then it came through last minute.”

Although Brown would’ve liked someone with a name, he knows Gooden is a very dangerous fight for anyone. He’s well aware of Gooden’s KO power but he does like the style matchup. It’s also a chance to remain active and start to build a winning streak.

“No, not at all. I guy like Jared Gooden is super underrated, has big power, and is really aggressive,” Brown explained. “Styles make fights and obviously I’m trying to fight up in the rankings but I’m looking to stay active. I haven’t been an active fighter in the past couple of years and I want to get active and build my winning streak and in order to do that, I need people to fight. He was available and he wanted to fight.”

Against Jared Gooden, Randy Brown believes he is better everywhere but he does see an advantage on the ground. Yet, regardless of where the fight takes place, Brown is confident he will not only get his hand raised, but he will finish Gooden.

“I’m a mixed martial artist and whatever presents itself is what I will take,” Brown said. “I do believe I have an advantage on the feet and the ground. I’m a better fighter and I can get it done wherever I want… I can see a finish happening.”

If Brown gets the stoppage wins he’s after, he doesn’t care who’s next. Instead, all he cares about is staying active and stringing together some wins. If he does that, he knows he can make a run for the rankings and the belt.

“I’m not thinking that far ahead. I just need to get a dub and I need to stay consistent,” Brown concluded. “It adds to the resume of stringing it together, this gives me an opportunity to string some wins together and move forward.”

Do you think Randy Brown will beat Jared Gooden at UFC Vegas 39?