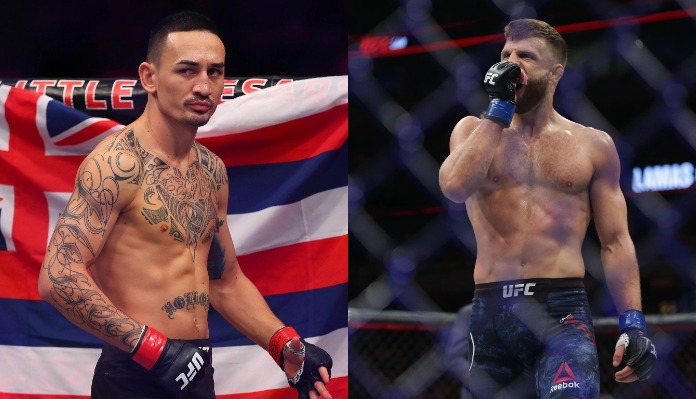 In the main event of UFC Fight Island 7, Max Holloway looks to return to the win column when he battles Calvin Kattar. Heading into the fight, the Hawaiian is a -160 favorite while Kattar is a +130 underdog.

Ahead of the fight, BJPENN.com reached out to several pro fighters to get their prediction for the scrap. To some surprise, all the fighters are unanimous in thinking Max Holloway gets his hand raised.

Stephen Thompson, UFC welterweight: Max Holloway. He is such a good striker and is a potential NMF.

Geoff Neal, UFC welterweight: I see Holloway winning it. He could be the champ and I hope gets another crack at Volkanovski.

AJ McKee, Bellator featherweight: I have to go with Holloway. Kattar will have to KO Max to win but his chin is so good and I think Holloway’s volume will be the difference. Holloway is still the champ, too because he did not lose last time.

Brandon Moreno, UFC flyweight: That is a good one. Max Holloway is one of my favorite fighters and I think he can get it done. But, Calvin Kattar has looked impressive so he can definitely win it, but I’ll say, Holloway.

Marlon Vera, UFC bantamweight: That is a tough one, dude. It is a good fight and I am a fan of both guys. Kattar has phenomenal boxing and is really clean. But, if we have the Max Holloway that showed up against Brian Ortega, he will win it. I can’t see Kattar knocking Holloway out. I think Holloway will use his output to win the decision.

Alex Morono, UFC welterweight: That is a hard matchup for Holloway. Max’s striking is so good but Calvin Kattar is legit and has such crisp boxing. I do think Holloway will be more active, survive the first two rounds, and win the last three to win a decision.

Christos Giagos, UFC lightweight: I got Max Holloway by decision. His footwork, volume, and striking will just be too much.

Who do you think will win the UFC Fight Island 7 main event between Max Holloway and Calvin Kattar?