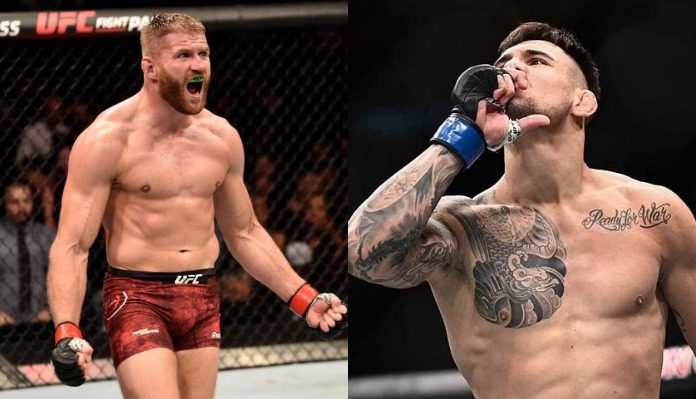 In the main event of UFC Vegas 54, a pivotal light heavyweight bout headlines the card as former champ Jan Blachowicz takes on Aleksandar Rakic. Heading into the fight, Blachowicz is a +164 underdog on FanDuel while the Austrian is a -205 favorite.

Ahead of the fight, BJPENN.com reached out to pro fighters to get their prediction for the scrap. Although Rakic is above a -200 favorite, the majority of pros believe the former champ in Blachowicz gets the job done as he will look much improved after losing his title.

Brandon Royval, UFC flyweight: I got Rakic, he can outstrike Blachowicz.

Frank Camacho, UFC lightweight: Man, I have to go with Jan Blachowicz. I think he didn’t show up against Glover and I expect him to show up here.

Parker Porter, UFC heavyweight: That should be a good fight but I will go with Blachowicz, you will see the former champ make his way back to title contention.

Fernie Garcia, UFC bantamweight: Rakic. He finds ways to win, might not be the most exciting but he’s so hard to beat and can outpoint Blachowicz.

Vince Morales, UFC bantamweight: Blachowicz, I think he rebounds in a big way after losing his belt.

Damon Jackson, UFC featherweight: I think Blachowicz but it’s going to be a tough fight. He didn’t look like himself and Rakic is solid but I’ll go with Blachowicz.

Joe Solecki, UFC lightweight: I think Blachowicz. He just didn’t look like himself in the last one and I think he’s much better than that.

Tyson Nam, UFC flyweight: Probably Jan Blachowicz, Rakic is on that layoff and hasn’t fought anyone as good as Jan before.