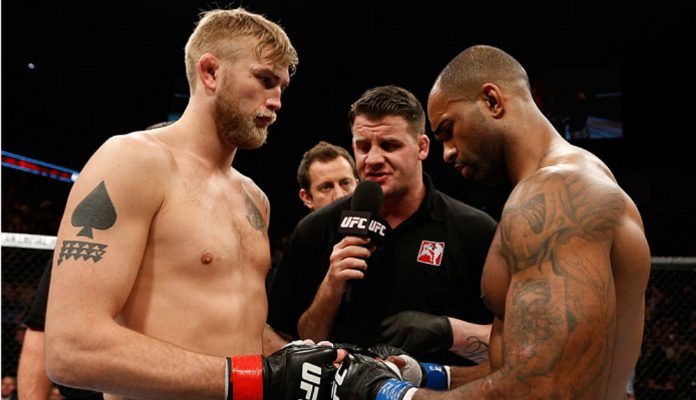 Gustafsson made his return to the sport and the light heavyweight division on the main card of UFC London as he took on Nikita Krylov. The Swede was on a three-fight losing skid, with all three losses coming by stoppage, and unfortunately for Gustafsson, he suffered another setback on Saturday.

Krylov came out quickly and dropped Gustafsson just seconds into the fight and the Swede couldn’t recover. The fight was eventually waved off just 67 seconds in and after the fight, Daniel Cormier and others said Gustafsson should retire but for Manuwa, he doesn’t think anyone should be telling a fighter to retire.

“With Gus, I don’t know man. You can’t really tell a fighter to retire, it’s up to the fighter themselves,” Manuwa said to BJPENN.com about Gustafsson’s future after his UFC London loss. “Gus took a bad loss and he started slow and Krylov started fast and caught him early. Krylov also doesn’t start fast so it paid off for him. I don’t know what Alex should do, Alex is my brother, I’ve texted him a few times since the fight and he will do what is best for him and I will leave that for him to decide. I don’t think other fighters or fans should be telling fighters to retire.”

Alexander Gustafsson is now 18-8 as a pro and has lost four straight fights by stoppage. Before the loss to Krylov, he suffered submission losses to Fabricio Werdum and Anthony Smith while losing by TKO to Jon Jones. Even though he is now 35 years old and on a losing skid, Gustafsson made no comment about retiring after the loss, and for Manuwa, he believes only the Swede should make that decision.

Do you agree with Jimi Manuwa that no fighters should tell Alexander Gustafsson to retire?