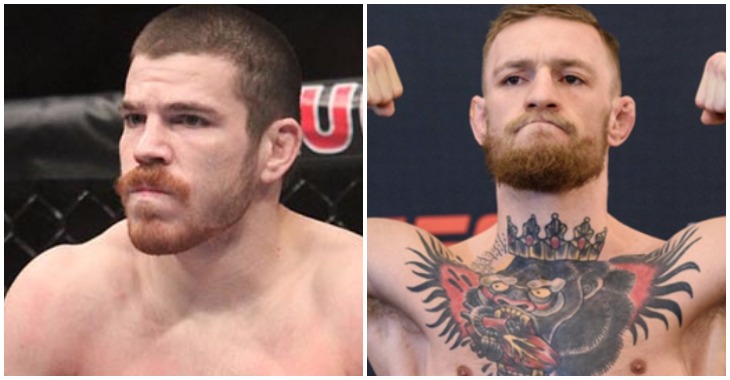 The biggest ongoing story in combat sports today surrounds a potential boxing mega-fight between UFC lightweight champion Conor McGregor and undefeated boxing great Floyd Mayweather. While this fight is not a done deal just yet, it is the most discussed topic in the game today. The latest member of the combat sports community to give his take on this potential mega-fight – and what it means for MMA and boxing – is fan favorite lightweight Jim Miller.

Miller discussed McGregor’s flirtation with the boxing world on the latest episode of BJ Penn Radio.

For Miller, one of the most significant ramifications of this potential McGregor-Mayweather fight is that it’s holding up the UFC lightweight division.

“We don’t know what the champ’s doing and when he’s going to be back or any of this stuff,” he said. “The guy’s [won] two belts but he hasn’t defended either one of them, which is frustrating. As a competitor, even though it’s not holding me up at this point, I had my opportunity [to contend]. If it hadn’t been for injuries and rematches and stuff like that I would have already had an opportunity at the title. The sport’s all about timing and it sucks seeing guys screwed over [by McGregor’s inactivity] a little bit.”

Miller than discussed the McGregor – Mayweather fight itself, saying that he believes that McGregor has the right to chase the massive payday he’d earn from it, but that all UFC fighters should also be allowed similar opportunities.

“It’s all about making money,” he said. “I can’t knock the guy for making money. He’s got this golden opportunity, it’s his right to go after it. Now, the UFC allowing it to happen, the UFC driving it to happen is a little bit screwed up, but you know, it brings attention to the UFC. They don’t care if it holds up the division. I don’t know. If he can make more than he has in his UFC fights for boxing, go for it. But then we all should be able to do stuff like that. I’ve always wanted to do kickboxing. I’ve watched some of [those fights] and a three-minute round sounds friggin’ awesome.”

“If they’re going to allow him to compete in another sport that’s not MMA – obviously not fighting for another promotion in MMA – then we should all get the opportunity to.”

Do you agree with Jim Miller on this one? Make your opinion heard in the comments section!