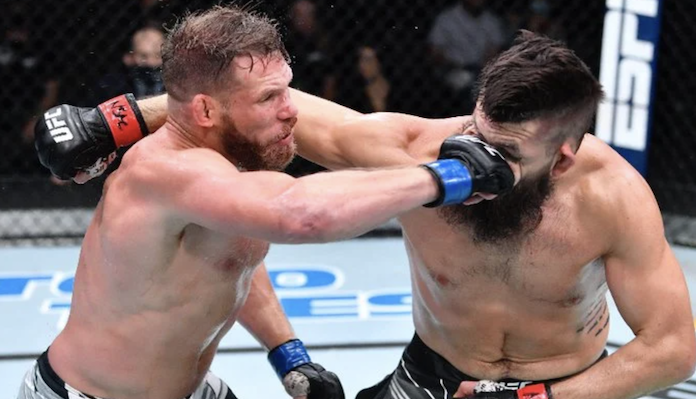 Jason Witt is pleased with his win over Bryan Barberena at UFC Vegas 33.

Witt entered the fight coming off a 16-second KO loss to Matthew Semelsberger and had a chip on his shoulder. He had heard all the talk that he didn’t have a chin and Barberena would KO him early. Witt also entered the fight knowing if he lost, it likely would’ve been the final fight of his career.

“That is something that was in the back of my head. I don’t want to say it was pressure, as it was almost freeing,” Witt said to BJPENN.com. “If I lost the fight, then alright, I’ll retire and I’m done and that’s how it is. But, if I won the fight, look at what happens, I got a new contract and a bonus. There was some thought that this may be my last fight, though.”

Witt came out strong and clearly won the first and second rounds using his wrestling to control the fight. He also dropped Barberena but in the third round, “Bam Bam” was putting it on Witt and was landing heavy shots. Yet, according to Witt, he says he was never that hurt.

“I didn’t really feel like I was rocked, it was more me just getting exhausted. We had two high-paced rounds which had a lot of grappling which tires you out even more,” Witt said. “I also held onto that guillotine for maybe a bit too long, but yeah, he rocked me a little bit, but I don’t think I was in danger. I knew where I was the entire time.”

When the final bell rang, Jason Witt was confident he should get the win on the scorecards. That ended up being the case and after reflecting on his performance, he says the win was the best performance of his career.

“This was the best performance I ever had in my career hands down. I hit him with some heavy shots too that I’m surprised didn’t get him out of there,” Witt said. “He’s super tough, but I think this fight showed I’m a well-rounded fighter and can mix things together well.”

With the victory, Witt is now 2-2 in the UFC and he revealed he got a new contract extension after the win. He now hopes to return as soon as possible against whoever the UFC puts in front of him.

“I want one or two more this year. I’m taking the week off as my knees are torn up from the canvas from wrestling. I’ll take a little bit of time to heal up my body but I want to return as soon as possible,” Witt concluded.

Who do you think Jason Witt should fight next after his win over Bryan Barberena?