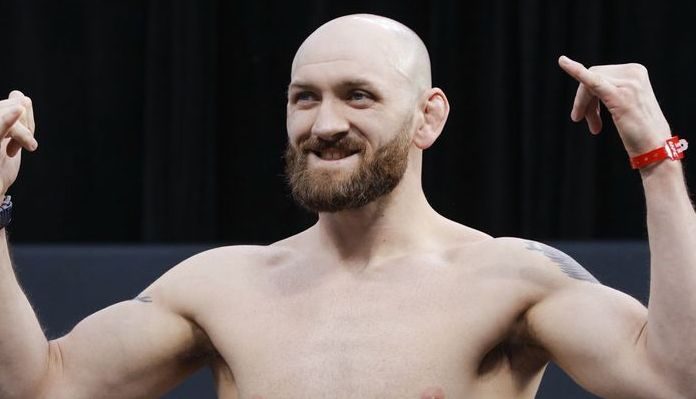 Zak Cummings ended 2018 exactly how he wanted to.

The former welterweight moved up to middleweight at UFC Milwaukee and defeated Trevor Smith by decision. Yet winning this fight wasn’t easy.

“It was a tough fight. I thought I won every round, it wasn’t easy. He fought me different than I thought he was going to,” Cummings told BJPENN.com. “I had expectations that he was going to try and take me down and grind me up against the fence, and I was going to be fighting off the takedowns. I think cause he cracked me off the bat, he got a little trigger happy and wanted to make it a stand-up fight. Or if he respected my ground game, that he didn’t want to wrestle or what. He is a tough, gritty opponent but I was expecting that. I felt like I landed more volume, the harder shots.”

When Smith ‘cracked’ Cummings early in the first, that punch resulted in Cummings losing vision in his eye. He then was fighting with one eye for the majority of the fight, and that was a real struggle. He didn’t have any depth of perception and couldn’t tell exactly where Smith was for most of the fight.

“I have to deal with this eye thing,” Cummings said. “That first punch broke my orbital, I had surgery on Wednesday and we will go from there.”

At one point in the fight, Cummings dropped Smith but because of his eye, he couldn’t tell where he was, so he couldn’t go ground and pound him to get the finish. Instead, he just had to stand there and try and look for him.

“It was incredibly hard. That first punch, everybody thought it was knee, it hit me and I looked up and saw three of him. Then the eye started closing, the cut man did a great job of opening it between rounds so the doctor didn’t stop it,” Cummings said. “But it was immediately closing up. I got hit in the other eye and it was really hard to see. I could only see out of one eye and I was seeing triple vision. It was hard to find him, it was hard to get out of the way.

“When I dropped him he disappeared. I didn’t know if I knocked him out, if he shot in on me. I had to stop and really look around and put my hands on him that my vision was so bad I has to start grappling him instead of just go for the kill. I wish I could’ve I just didn’t know where he was. It was definitely something to overcome, it wasn’t easy.”

In the end, Cummings overcame that obstacle and got the win. He got the win in his middleweight debut and felt more comfortable at the division. Although it was a tough fight, where he couldn’t see, he is glad he ended 2018 off with that victory. He also got a win on the final FOX card ever, and for Cummings, it is a memorable feat that he will remember for the rest of his career.

“It was a cool experience. I was happy to be apart of the card, because FOX has done so much for the UFC over the past seven years. The sport really involved and became mainstream. It was an honor to be apart of the final card. It was cool to be a part of it but I’m excited to see what ESPN has in store for us.”

For now, Cummings is dealing with the eye injury and is hoping to return whenever the doctors say he can.