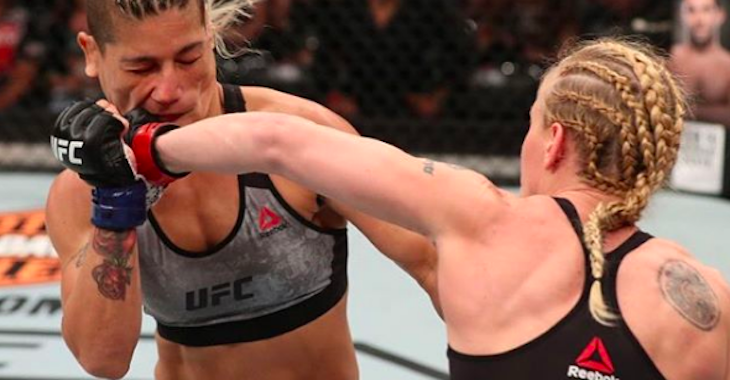 Former UFC bantamweight title challenger Valentina Shevchenko could not have been more impressive in her Saturday night flyweight debut, out-landing her opponent Priscila Cachoeira by a 230-3 margin en-route to a second-round submission win. Regrettably, much of the buzz surrounding this fight has been negative, as the widespread perception is that referee Mario Yamasaki let this one-sided beatdown go on for far longer than it should have.

Valentina Shevchenko’s manager Roger Allen has heard this backlash, and though he’s a little less heavy-handed than UFC President Dana White and some of Yamasaki’s other critics, he agrees the referee could have stopped the fight earlier.

“There were several times I thought I saw the referee move in as if he was going to stop the fight,” Allen told BJPenn.com’s Chris Taylor. “It appeared that each time Priscilla moved or action changed it continued.”

“I could not see what the referee was observing but, From my perspective it could have been stopped sooner,” he continued. “Obviously my primary focus was on Valentina and the time clock”

What was your impression of Valentina Shevchenko’s mauling of Priscila Cachoeira? Do you think Mario Yamasaki should have stopped the fight earlier, or does the onus perhaps lie on the UFC’s matchmakers or Cachoeira’s corner?