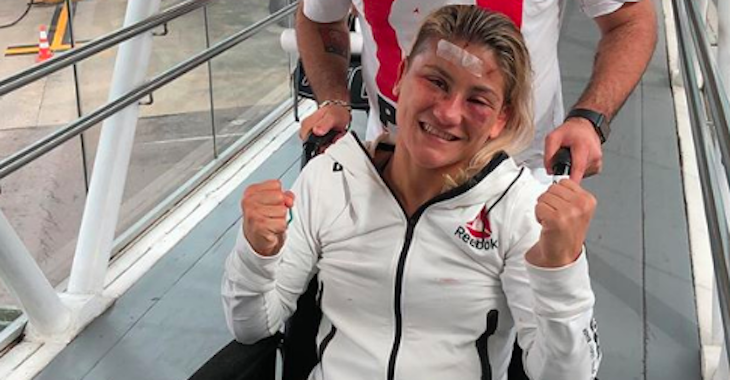 Over the weekend, in the co-main event of the UFC’s trip to Belem, Brazilian flyweight Priscila Cachoeira stepped into the Octagon for the first time. Despite the fact she was making her UFC debut with just 8 pro fights behind her, her opponent was the vastly more experienced Valentina Shevchenko, who is widely regarded as one of the best female fighters on earth.

In the end, Cachoeira’s experiential deficit manifested itself in a truly lopsided win for Shevchenko. The Kyrgyzstani contender out-landed her young Brazilian by an insane 230-3 margin en route to a second-round submission win. It was one of the most brutal beatdowns to hit our screens in a long, long time.

Amazingly, Cachoeira didn’t suffer any facial fractures in this tough loss. She did, however, sustain a major knee injury, tearing both her meniscus an ACL in the first frame.

“She tore her meniscus and ACL in the beginning of the first round, the first time they engaged, and it went all downhill from that moment,” Cachoeira’s manager Tiago Okamura told MMAFighting.com. “We couldn’t do anything.”

Okamura also addressed the backlash being launched at referee Mario Yamasaki, who many fans believe should have stopped the fight earlier.

“He could have stopped it in a few occasions,” Okamura said, “But ‘Pedrita’ is really tough and doesn’t give up. She was trying to get out the entire time. Being a referee is a very complicated job.”

Cachoeira’s coach and cornerman Gilliard Parana also chimed in on her injuries in a lengthy Instagram post, promising his fighter will return stronger than ever after her surgery.

Do you think Priscila Cachoeira’s fight with Valentina Shevchenko should have been stopped earlier?