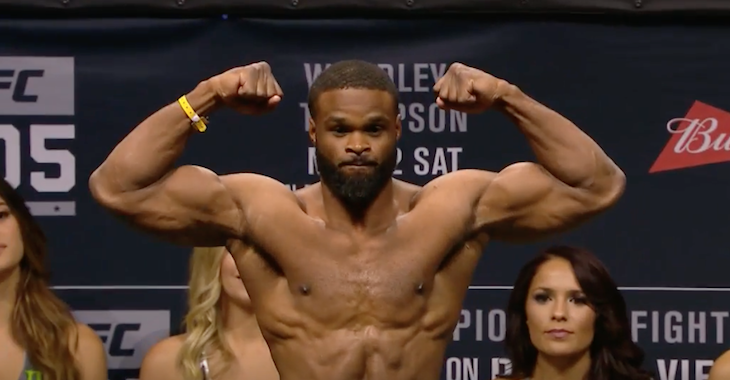 On the heels of UFC welterweight champion Tyron Woodley’s majority draw against Stephen Thompson at UFC 205 in November, a five-round contest that saw him retain his welterweight title in the co-main event, there has been much speculation as to who Woodley’s next fight will be against.

Given that the fight with Thompson was a draw, UFC President Dana White stated immediately following the fight that the next step would be for the pair to have a rematch. While Woodley was initially open to the idea of a rematch, he then changed his tune after re-watching the fight and coming to the conclusion that the fight shouldn’t have been scored as a draw.

Despite that, during an exclusive interview on BJPenn.com’s Rapid Fire segment, Thompson revealed that the UFC was looking to book a rematch between the pair for UFC 209 in Nevada on March 4th. While there had been no official word yet on when the fight would happen, footage surfaced recently of Woodley and UFC middleweight champion Michael Bisping agreeing to a catchweight bout.

In a recent interview with BJPenn.com’s Chris Taylor, Woodley spoke about the potential fight with Bisping, as well as a fight at UFC 209:

“I am targeting UFC 209 on March 4 in Las Vegas. The problem is it is not yet 100% set yet because there are lots of options out there. You know I could run it back with Stephen ‘Wonderboy’ Thomspon. I am pretty sure he would like another chance to lose again. And it seems like Michael Bisping wants to put his belt on the line. At first I thought he (Bisping) wanted to do a catchweight and did not want to put his belt on the line but I stand corrected because he actually wants to put his middleweight strap on the line.”

“I mean that is not a good move for him. But it is something he wants to do. And it would be a great move for me so I’m happy to take it from him. That would be a win-win fight for me. I mean people can already argue that Bisping may not be the best middleweight out there. Now he would have a guy coming to his weight that would be faster, stronger, a better wrestler and a harder puncher than he is. And I have a good chin. So all around, it would be a bad fight for Mike. I don’t think he realizes it, but I would hurt him in there.”

While Woodley of course would be going up in weight, he isn’t too concerned about the size difference between he and ‘The Count’.

“Yea you know he might outweigh me by 5 or 10 pounds. You know I am 5’8” or 5’9” so everybody in my weight division is already taller than me. The thing about middleweight is, that is the reason a lot of guys pick Mike to fight. They all want to fight Bisping because he is not overpowering. As far as strength, as far as wrestling, as far as grappling, as far as one-punch knockout power. I mean he is a great fighter. He fights great. He’s always in bloody wars. He has good cardio. He throws a lot of significant strikes. But sometimes, a guy can throw one punch that equals ten that Michael would throw.”