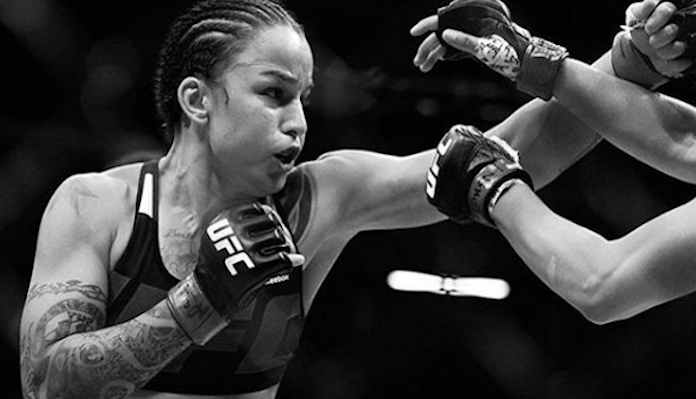 On May 12, in what is expected to be the main event of UFC 224 in Brazil, Raquel Pennington will get her long-awaited crack at the UFC women’s bantamweight title, as she takes on champion Amanda Nunes.

While this fight is now official there was a stretch when it looked like the UFC would go in another direction. The plan, it seemed, was to pit Nunes against dominating UFC women’s featherweight champion Cris Cyborg.

In the end, however, Cyborg fought Yana Kunitskaya at UFC 222, which re-opened the door for Pennington’s title fight with Nunes. Needless to say, Pennington is glad this is the way things shook out.

“For me, [the title shot] was the next thing that’s meant to happen, and I feel like I definitely deserve this opportunity, so it’s just all about the paperwork,” Raquel Pennington said on the latest stacked episode of BJ Penn Radio. “There was that little hiccup that happened when freaking Cyborg fought. It became a little frustrating, because then there was a little question mark thrown out there. I feel like it was kind of a thing where common sense prevailed and it all worked out.”

“The negotiations were happening, so the last thing to do was sign the paper and before Cyborg even happened, I was supposed to have my contract in hand to be able to sign,” Pennington continued. “But I didn’t end up getting it, and then, when Cyborg fought, and then that question mark went up with Dana’s comment, a little frustration went out there.”

“I actually got frustrated, and I reached out to a million people in the UFC, was asking them what the heck was going on, because to me it just wasn’t fair. I know it’s something that doesn’t always go the fighter’s way, or I’m not the only athlete that things have been thrown up into question, or fights have actually been taken away from fighters.”

“It was kind of one of those things where I did get really frustrated for a second. Then I just told Tecia [Torres], and I told my family, I was like, ‘You know what? Whatever’s meant to happen is going to happen regardless. One way or another I will eventually fight for this belt if I have to take another detour. It’s going to be a bunch of bullshit, but I’m going continue to go with the flow.’ I’m the type of person that goes with the flow, and I just … I put my best foot forward. There’s some things that are just not in your control. After reaching out to everybody, they kind of said it was news to them. I think two days after Cyborg fought, I ended up getting the contract.”

Do you believe the UFC made the right choice pitting Raquel Pennington against Amanda Nunes?