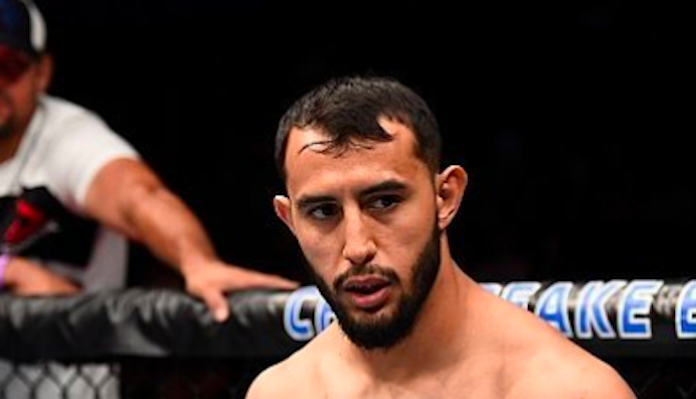 Having gone 2-0 since joining the UFC, stopping both Joachim Christensen and Jeremy Kimball in the first round, undefeated light heavyweight prospect Dominick Reyes feels he’s earned a top-15 opponent. To that end, he believes Jared Cannonier and Gian Villante would both be solid options – though the latter was recently linked to a bout with Sam Alvey.

“I’m thinking either May or June,” Reyes said of his next fight on the latest stacked episode of BJ Penn Radio. “I tried to get on a card in Utica, but it didn’t work out. So I’m still working to get that fight. I’d like to fight Villante, maybe then Cannonier, and get in the top-15, man. That’s what I’m looking at right now.”

“We were looking at Villante, but then Alvey came out, so that put the brakes on that. So, we’ll see…”

Whoever he’s locked in the cage with next, Reyes has one main focus at this juncture of his career: becoming a true force of destruction with no deficiencies in his game.

“My main focus is just becoming an absolute beast that can’t be stopped,” he said.

“I was completely unknown [when I joined the UFC], but I’ve always been here working, man,” he added. “Just working and working and working. I always knew when my time comes, I want to be ready. I want people to not really [say], ‘oh, well there’s a hole here, or a weakness here.’ I wanted to be complete when I came up to the scene so people could get behind me and not be like, ‘oh, well, he’s got good striking but his wrestling sucks,’ or whatever.”

“I wanna do it at my pace,” he concluded. “Fight the right fights. And then there will be a time when every fight’s the right fight. But right now I’m still relatively young and I would like one, maybe two more. And then start making a run at the title.”

What do you think the future holds for the undefeated Dominick Reyes?