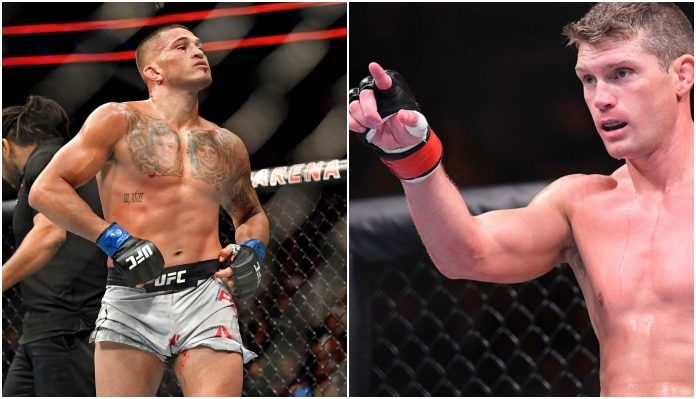 The Octagon heads to Nashville, Tennessee this weekend, with a very interesting welterweight matchup in the main event. Former lightweight champion Anthony Pettis will be moving up in weight to challenge former welterweight title challenger Stephen Thompson.

Ahead of this welterweight fight, BJPENN.com reached out to several pro fighters to get their predictions for the fight.

Beneil Dariush, UFC lightweight: I don’t think I am going to pick against ‘Wonderboy’. I really like that guy and we hung out before and I got to tell you he is one of the coolest guys I have ever met. So I’m going to go with ‘Wonderboy.’

Drew Dober, UFC lightweight: I think both are very fluid and have exciting styles. But, Thompson’s size and reach will play a factor in the fight and Thompson will win.

Macy Chiasson, UFC bantamweight: They have very similar styles. It will be a great fight, but I draw the line on that one. I honestly have no clue.

Blagoy Ivanov, UFC heavyweight: I am going to go with Anthony Pettis.

Steven Peterson, UFC featherweight: I think ‘Wonderboy’ is going to take it. Just his size advantage. Pettis going up will be way to undersized for the welterweight division.

Georgi Karakhanyan, Bellator featherweight: I am picking Thompson. Just the size will play a big role.

Montana De La Rosa, UFC flyweight: I am going to go with Wonderboy.

Jordan Rinaldi, UFC featherweight: Stephen, he is my boy. Pettis is a big guy anyway, but Stephen is the better striker and more dynamic with his stuff. I think Stephen will out point him if not finish him.

John Makdessi, UFC lightweight: I am going to go with Anthony, he is my training partner and I see him every day.