EXCLUSIVE | Louis Smolka: ‘You’re only as good as your last performance’

11-2 UFC flyweight Louis Smolka is looking to bounce back from a bitter loss.

At UFC Fight Night 96 in a bout against Brandon Moreno, Smolka was finished for the first time in his professional MMA career as Moreno locked in a guillotine choke forcing the Hawaiian to submit. With his only loss prior to fighting Moreno being a close split-decision, “Da Last Samurai” is hungry to get back in the win column. 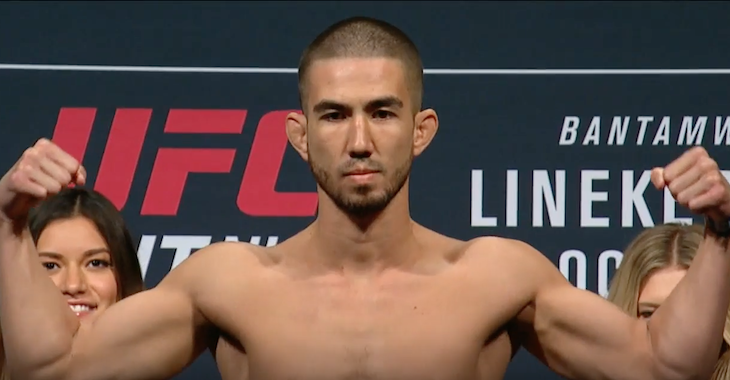 Smolka is set to fight Ray Borg at UFC 207 in December and will look to put on an impressive performance coming off a loss that is still stinging.

“Every fight is the most important fight of your career,” Smolka told BJPenn.com Radio host, “Kinch” on Wednesday’s episode. “Every single fight, you have to treat it as your biggest fight because you’re only as good as your last performance. As fickle as it is, people judge you off of what they remember.

“Aldo was the champ for so long and he was the man and then after like 13 seconds, everybody is writing him off saying he’s not that good. It’s like, what happened to all those other times when he was the man but everyone just remembers the last fight.”

Although Aldo came back to win the UFC interim featherweight title in a rematch with Frankie Edgar after being knocked out by Conor McGregor, Smolka makes a point that people will remember the last performance that really stands out in their mind.

As far as his next fight against Borg, Smolka feels that it is the beginning of the end of one of their careers and definitely wants to have his hand raised with an impressive performance.

“I think this is the death of a prospect right now,” Smolka said. “One of us is gonna step up and win and the other one is gonna, I feel like the other is gonna fall off after this. Maybe get another win or two in the UFC and retire with a 5-5 record or get booted and then have to come back.”

The Hawaiian said he is just calling it as he sees it with either Borg or himself continuing to climb the ladder while the other will find it much harder to bounce back. Both Smolka and Borg are coming off a loss and the Hawaiian says losing two in a row will be very tough to come back from for either of them.

“This is do or die,” Smolka confirmed. “I think this is the beginning of the end for one of us.”

Who are you picking to win the fight between Louis Smolka and Ray Borg? Sound off in the comment section!