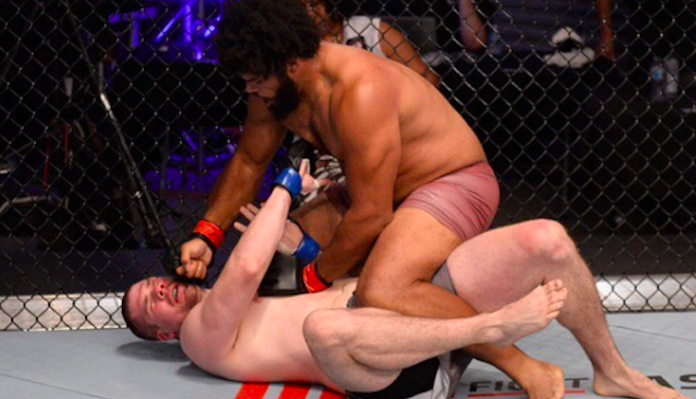 Juan Adams, an undefeated heavyweight prospect who earned a UFC contract with a knockout of Shawn Teed on a July episode of Dana White’s Tuesday Night Contender Series, is extremely confident. While he is still yet to partake in his UFC debut, a December 15 scrap with Chris De La Rocha, he already feels like he can beat any heavyweight on the UFC roster — with the exception of three men.

In Juan Adams’ eyes, the only UFC heavyweights that he’d struggle against currently are Curtis Blaydes, Alistair Overeem, and reigning champ Daniel Cormier. The hulking prospect broke it down on episode 102 of BJPENN.COM Radio.

“Obviously there’s Curtis Blaydes, then there’s the champion and Alistair Overeem that I feel like present a legitimate challenge to me,” he said. “The rest of the guys — I mean, it’s heavyweight so everyone always has a puncher’s chance — I don’t think anyone can keep up with my pace, other than that. And if they can keep up with my pace, they’re much too small to handle my power.”

From there, Juan Adams opened up on why these fighters in particular stand out as challenges to him.

“Well [Daniel Cormier is] more of an experience standpoint, I don’t think he’s athletic, and he’s also 40 years old so by the time I’m up in the conversation he’ll be up to retire,” he explained. “Alistair Overeem just because he is that high level of a striker and that would be the only area where I see any deficiency or anyone can really criticize my game would be in the striking aspect. I think he’s the best striker in the heavyweight division so that’s why I say his name. I don’t really feel threatened by him, but I do have to respect that aspect of his game.”

So why is Juan Adams so confident against the UFC’s current stable of heavyweights? He just believes he works harder than they do.

“Honestly I think at the end of the day it boils down to a desire to work,” he said. “A lot of heavyweights will experience… They’re the best guy in the room, they’re the biggest guy in the room. They’ve always been able to end stuff quickly, and they rely on that a little too much. For me, the way I train, I don’t think about doing just enough to get by. I want to be better than the next best guy on my worst day. It’s just a mentality that I have. I hate losing. When I wrestled collegiately, I didn’t cheat the goals that I wanted through there, and I worked really hard for that. But even that wasn’t enough so there’s always going to be times when circumstances don’t favor you, and I want to make it to where in this sport, even when those circumstances do arise and I’m not at my best, my best is still better than anyone else. My not-best is still better than anyone else. So that’s just the mentality that I have about it. I don’t train to be the best on my best day, I train to be the best on my worst day.”

Hard to argue with that. What do you think the future holds for Juan Adams?