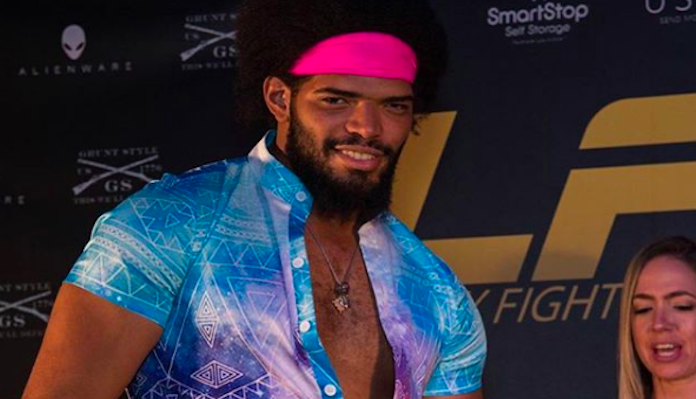 Back in July, 26-year-old heavyweight prospect Juan Adams (4-0) earned himself a UFC contract by knocking out Shawn Teed on Dana White’s Tuesday Night Contender Series. After a few months of waiting — a little longer than he’d hoped — the hulking heavyweight finisher is now set to make his UFC debut opposite Chris De La Rocha at UFC on Fox 31 on December 15 in Milwaukee.

Heading into this UFC debut, Juan Adams is eager to introduce himself to UFC fans with another highlight reel victory. He believes that he is the next big thing in the UFC heavyweight division — both in terms of athletic ability and marketability — and he’s excited to prove it.

“Obviously the heavyweight division is lacking a couple things right now,” Juan Adams said on episode 102 of BJPENN.COM Radio. “We don’t really have a lot of star power apart from myself. You know, our top guys aren’t super entertaining and obviously Derrick Lewis adds the entertainment aspect, but I think I’m a little more aesthetically pleasing to look at than the other heavyweights in the division. There’s that aspect. I definitely connect with fans a lot better than most of the other heavyweights in the UFC. And just in terms of the athletic side of it, I’m the type of athlete the UFC has never seen before in this division and I don’t think anyone can match my pace, my power, or my combination of size, speed and strength. Its definitely something new, I’ve got a good look to me, I’m very marketable.”

“There’s this kind of stigma for fighters not being the most intelligent out there, but I have degree in computer science,” Adams continued. “I minored in exercise science, before this I was a loan coordinator at a bank. So I have a unique experience and a unique outlook on things. I have an ability to market myself and the company much better than most other people in the division. No one ever really has everything figured out, but I do take criticism pretty well and I like to go from there and learn from it and learn from each fight and grow and progress, and really do put myself in a good position. Because the better I do, and the better the UFC does, the better everyone does and it makes money for all of us longterm. So that’s definitely the end-game for me. Ultimately there’s gotta be a life after fighting, so that’s what I’m trying to set myself up for right now.”

“I want to be very active,” he said. “I want to fight four times a year. That’s what I want to do. When I do eventually have the belt, I want to defend it twice a year at a minimum. It’s not a fact of if I have the ability, I know I have the ability I just need the opportunity. Once I have my debut I think the world will finally see that and you’ll see a jump in activity from me. There will be an increase in demand for me and I’m happy to supply that.”

Juan Adams, as you can probably tell, is long on confidence — and really, it’s easy to understand why. This near 300-pound behemoth moves like a middleweight and punches with the kind of destructive power you find more commonly in wrecking balls and torpedos.

“The thing is, I’m more of a monster than anyone in the division,” he said. “No ones as big as I am, and anyone that’s close to the same size as me has nowhere near the athletic ability that I do, and I believe [UFC President] Dana White saw that [on the Contender Series]. My accomplishments show that I’m the youngest American UFC heavyweight, I have the fewest fights of any male competitor in the UFC, so there’s clearly something there. They’ve seen something. I know it, my coaches know it. Its just a matter of time until the whole world knows it.”

How far do you think Juan Adams can travel on the perilous heavyweight savannah? Is there a UFC title in his future?