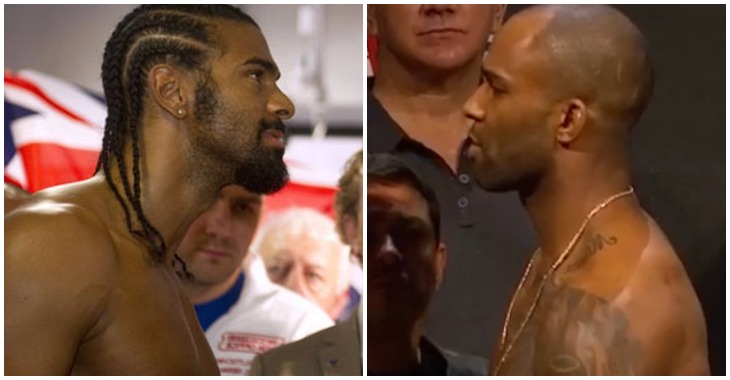 British knockout artist Jimi Manuwa is one of the best light heavyweight mixed martial artists on earth. And though he is currently riding a tough knockout loss to upcoming light heavyweight title challenger Volkan Oezdemir, he is still only a win or two from his own shot at the belt.

While Manuwa has plenty of interesting options in the UFC light heavyweight division – ranging from Mauricio “Shogun” Rua to Glover Teixeira – he has also been flirting with the idea of a boxing match with fellow Brit David Haye.

Apparently, this is still a fight Manuwa is very, very interested in. He explained why Haye is such an appealing opponent on the latest episode of BJ Penn Radio.

“It’s all about promoting [the fight], you know, and getting fire behind it as well, you know?” Manuwa explained. “At the end of the day, it’s a business thing as well, so we’ve got to make it happen. It all depends on the money, doesn’t it? The only person I can see fighting in boxing is David Haye. He’s a small heavyweight, there’s no cruiserweights that are big enough to make a bigger, big fight. It’s only David Haye. He’s the only small heavyweight. He fits perfectly into the category, you know?”

At the end of the day, Manuwa is hoping a knockout defeat of David Haye would open the door to more big opportunities, both in the MMA cage and the boxing ring.

“When I knock David Haye out, then people will stand up and listen and take attention. Then big fights will come flooding in. Everyone will want the big fight [with me], they’ll be like, ‘Who’s this MMA fighter who’s just knocked out David Haye?'”

Who do you want to see Jimi Manuwa fight next?