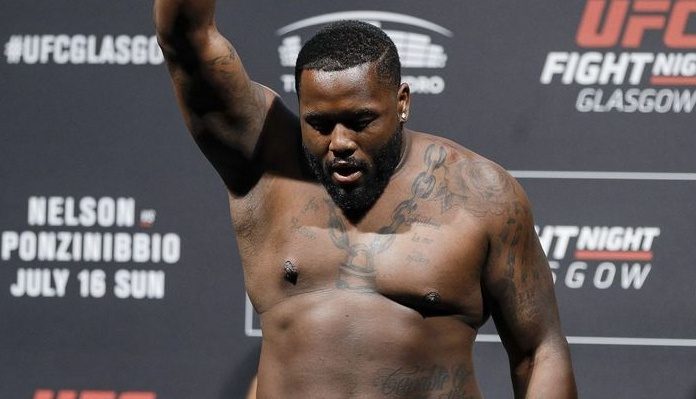 For Justin Willis, fighting isn’t a sport, it’s not just a paycheck, it’s life and it’s something he was made for. Fighting is in his blood, it’s what he grew up on, and it’s made him exactly who he is today; a rising contender in the UFC’s heavyweight division.

Holding a professional record of 8-1 in his career, Willis is coming off a big unanimous decision victory over Mark Hunt in his most recent fight back in December 2018.

Since entering the UFC in 2017, Willis has been undefeated, winning his first four fights with the promotion.

In his next fight, Willis will find himself matched up against fourth-ranked Curtis Blaydes who’s coming off a loss to Francis Ngannou in his last fight. In an exclusive interview with BJPenn.com, Willis talked about his career with the UFC and his upcoming matchup against Blaydes.

Making the most of every fight and opportunity thrown his way, Willis is going through everything he envisioned for himself as he was coming up in this career.

“This is something I always envisioned, this was all mentally planned for me,” Willis explained. “This is all a reflection to the work I was doing before anybody knew who I was. It was all for this, it was all for these moments. I don’t have mixed emotions, I’m steadfast, and I have tunnel vision and it’s time to get it.”

One of Willis’ most recent opponents, Allen Crowder faced controversial newcomer Greg Hardy in a fight that ended with Hardy getting disqualified because of an illegal knee, and as Willis watched it, he noticed an in Crowder.

“Crowder was winning that fight and I think Hardy threw an illegal knee due to fatigue and got disqualified, it is what it is,” Willis said. “Big ups to Crowder. A you fight me, you’re going to be a better fighter in every facet, and I believe he for his opponent. It’s kind of obvious that fighters get better after facing me, I make them do some soul-searching.”

Headed into his fight against Hunt, many fans and media believed that Willis was in a sense, sent in to get rid of Hunt who had a long-standing beef with the UFC.

‘Big Pretty’ didn’t see it as he was doing a favor for the UFC, he was just fighting, the way he’s been fighting since he was growing up.

“A fight is a fight, man,” Willis stated. “The media makes so much of it, but a fight is a fight. For me, I’ve been doing this since I was a little boy so I know how serious a fight really is. I’ve seen people die in . It’s one of those things where I take it very seriously so I don’t like anything extra enter my mind. Whatever they had planned, I had my own plan and that was to go out there and win. F*ck everybody else’s plan.”

Calling the American Kickboxing Academy home for Willis also means he’s got to be around current heavyweight champion Daniel Cormier and former heavyweight champion Cain Velasquez, and while their guidance has helped him along the way, Willis now sets out to be an example for the younger fighters coming up through AKA.

“We’re all a bunch of alpha-males, at one point I was the little brother who grew up and now I’m a grown-ass man,” Willis said. “It’s one of those things where it was an honor and blessing to watch guys like Cain and DC but now I know we have younger guys watching me, and I do things differently than them. It’s just a blessing to sit back and watch greatness. I give credit where credit is due but when it comes to the trajectory of my career, it’s about me.”

As he prepares for his matchup against Curtis Blaydes scheduled to take place on March 23, 2019, in Nashville, Tennessee, Willis isn’t worried about anything else except winning.

While a win could launch him into the top of the heavyweight rankings, and he’s got a chance to make a big impression in the UFC. All that Justin Willis cares about is winning.

“I don’t give about anything but winning,” Willis claimed. “I’m not here to prove anything to anyone. I’m here to win and fulfill my destiny and my legacy. The UFC is the vehicle of this, but when I get into the Octagon, it’s all about me so I only worry about myself.”

When asked about the destiny and legacy he plans to leave, Willis says being the greatest of all-time is what fuels him. With Blaydes scheduled to be his next opponent, Willis isn’t worried about anyone or anything else that could come in his future.

“I’m just going to worry about Blaydes,” Willis said. “Curtis Blaydes is a get wobbled and wrestle fighter cause he’s fearful, he’s scared. He gets wobbled and he goes to wrestling, and he’s going to understand that he’s fighting me.

“I’m a brick motherf*cking wall that moves like a blur, and he’s going to have his big troubles. That’s all I need to say, that’s all I want to say.

As Willis prepares for Blaydes and plans to further cement his legacy and fulfill his destiny, he knows that there’s so much more to this for him.

Growing up around fighting, where not everyone was able to make it out and secure a better life for themselves, that’s what drives Willis.

“The statistics are overwhelming,” Willis shared. “The people who grew up in similar situations like myself who society, the system, and the environment always told them that they can not, I was just one of those young brothers that never fell for it. I always knew that I could, that’s my blessing. So hopefully my blessing through osmosis and me being me will hopefully start to be infectious and pass it on to someone who it.”

Justin Willis doesn’t need luck, he doesn’t need a storyline, and he doesn’t need any other motivation than the man in the mirror. When he faces Curtis Blaydes at UFC Nashville Willis will bring what he’s learned growing up in life and in the gym to further cement that he was born for this, and he’s set on becoming the greatest of all-time.