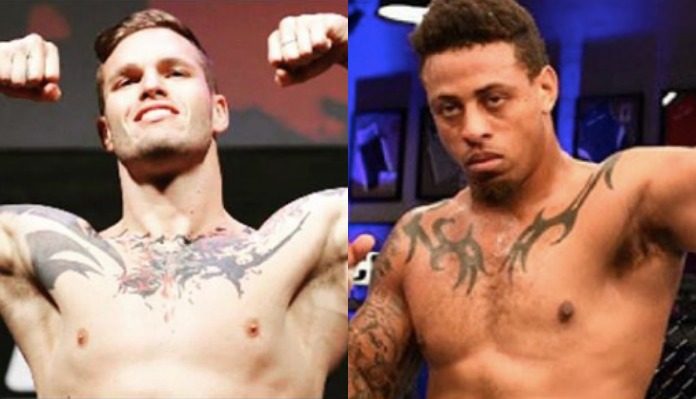 A heavyweight tilt between Greg Hardy and Allen Crowder served as the co-headliner of tonight’s UFC on ESPN+ 1 event in Brooklyn.

All three of Greg Hardy’s career wins have come by way of first-round stoppage.

Meanwhile, Allen Crowder enters tonight’s fight with a 9-3 record overall. In his latest octagon appearance at UFC 218, he suffered first-round knockout loss at the hands of Justin Willis.

Round one begins and Greg Hardy charges forward with a left hand. Crowder replies with a right hand. Hardy continues to press the action. He throws a combination that appears to connect. Crowder clinches up and presses Greg against the cage. The fighters break and Hardy lands a left hand. Crowder shoots in but there’s nothing there in terms of a takedown. Greg Hardy with a low kick. He follows that up with a left. He lands a knee to the body but Crowder catches his leg and drags him to the floor. Three minutes remain in the opening round. Crowder is working from full guard. He steps over into half guard. Hardy is looking to sweep. He scrambles but Allen drags him right back down to the canvas. Crowder moves to side control. Hardy immediately attempts to scramble by kicking off the cage. It works, he is back up to his feet. Allen has a hold of Greg’s neck. He looks for a guillotine. Hardy escapes and winds up in top position. He lands a hammer fist and then another. Crowder scrambles and gets back to his feet. Hardy lands a right hand and the horn sounds to end round one.

Round two begins and Crowder attempts to shoot for a takedown but it is not there. Hardy with a superman punch. Crowder avoids and then unloads a combination. Greg Hardy with a left hook and then just misses with an uppercut. Another nice jab from the former NFL player. Crowder circles along the outside. Greg Hardy steps in with a right hand. Allen Crowder is talking to him now. He charges forward with a combination. Hardy responds with a nice elbow from the clinch. The fighters continue to battle. Crowder has one leg on the ground and Hardy hits him with a knee. The referee immediately steps in and calls the fight off. Crowder wins via disqualification.