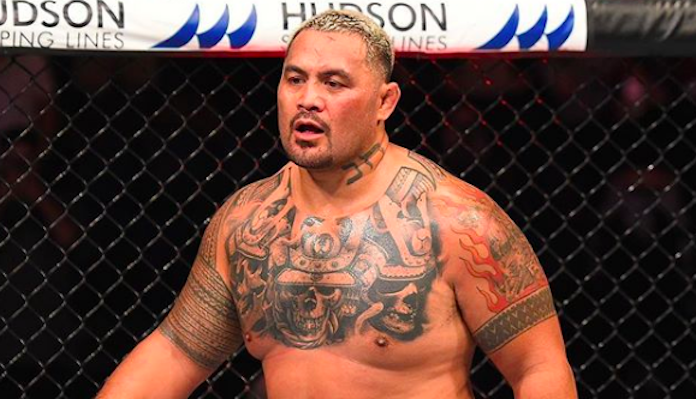 Mark Hunt enters tonight’s contest looking to rebound, this after suffering back-to-back losses to opponents Curtis Blaydes and Alexey Oleynik in his most recent octagon appearances. Prior to the setbacks, “The Super Samoan” was coming off a TKO victory over recent division title challenger Derrick Lewis.

As for Justin Willis, “Big Pretty” improved his overall record to 7-1 this past April, this after scoring a unanimous decision victory over Chase Sherman at UFC Fight Night 128.

Round one of this UFC Adelaide contest begins and Mark Hunt quickly takes the center of the octagon. Willis lands a kick to the body. Hunt returns fire with a low kick. “The Super Samoan” leaps in with a right hand that misses. Willis responds with a low kick. Hunt circles and lands a low kick. He shin is busted up and bleeding pretty badly. That won’t stop Mark Hunt though. He presses forward and lands a high kick which is partially blocked. Both men connect with right hands. Hunt lands a low kick and then a follow up kick to the body. He ducks under a Willis punch and lands a right hand. Justin leaps forward with a combination but only a body punch lands. Willis just misses with a left hand over the top. Mark Hunt paws with his jab. He misses with a straight punch to the body. Willis side steps to avoid a right. Hunt lands a kick to the body of his opponent. Willis responds with a low kick. Under one minute remains in round one. Hunt just misses with a big right. Lewis snaps off a quick jab. Hunt presses forward but the horn ultimately sounds to end round one.

Round two begins and Hunt presses forward early. Willis tries to keep him at bay with a left hand. Hunt avoids and continues to inch his way closer to Willis. “The Super Samoan” seems very relaxed. Willis catches him with a crisp jab. Another good jab from Willis. Mark lands a straight right to the body. He continues to stalk Willis. Hunt misses with a right hand and Willis catches him with a left. Hunt is trying his best to get inside and land a big shot but just can’t seem to do it. Willis continues to work his jab and ends up knocking out Hunt’s mouthpiece with a punch. The referee steps in so Mark can reapply the hardware. We restart and Willis continues to work his jab. The horn sounds to end round two.

Round three begins and Hunt lands a nice kick to the body of Willis. Justin fires back with his left jab. That is a fast punch for a heavyweight. “Big Pretty” lands a high kick that lands. Hunt seems to be ok and walks forward. Willis tags him with a right. Mark Hunt really needs to do something here. Only three minutes remain in what will serve as his final fight with the UFC. He swings and misses with a huge right hand. Willis pops him with a pair of jabs. Hunt with a left to the body. He is trying to bait Willis into a brawl but Justin isn’t having it. Willis with a nice uppercut followed by a right hand. Mark Hunt leaps in with a punch. He needs something big to happen in these final moments. Another massive right hand attempt misses from Hunt. He seems frustrated. Willis snaps off another left jab and then another. Hunt continues to press forward but is just eating shots for his efforts. Willis continues to pepper him with jabs. Thirty seconds remain. Mark Hunt with a kick to the body. The horn sounds to end round three.