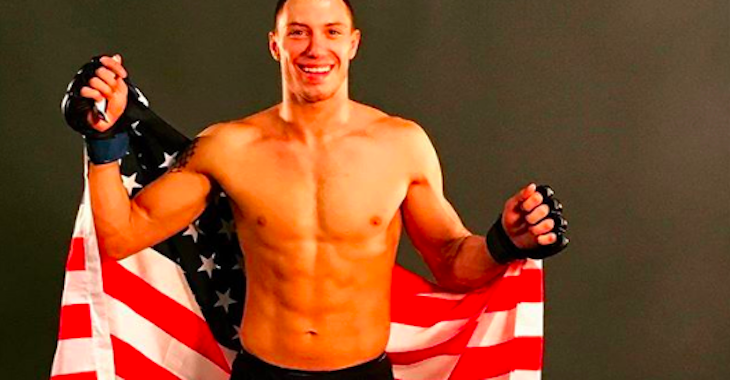 Riding high off a thudding knockout of the highly-regarded Joe Duffy, James Vick (12-1) feels he’s ready for a big step up in competition. He was hoping to get that step up when the UFC touches down in Austin, Texas – just hours from his hometown – this February. It was his hope that he could battle fan favorite lightweight-turned-welterweight Donald “Cowboy” Cerrone in the card’s main event.

Unfortunately for Vick, Cerrone was pencilled in for a scrap with Hawaii’s Yancy Medeiros this week. Though neither Cerrone nor Medeiros is from Texas, their fight will serve as the Austin card’s main event. Unsurprisingly, Vicki is pretty unhappy about this development.

“This is a fucking joke,” Vick said on the latest episode of BJ Penn Radio. “I texted Sean Shelby a month ago and said ‘hey’ – this was probably three, at least three weeks, maybe even a month ago – I said, ‘hey, I’ll fight Donald,’ because I saw Cerrone went on the Brendan Schaub Podcast, the Fighter and the Kid. He goes on the podcast, he’s talking about ‘I’m going to drop back down to lightweight.’ I text Sean I said, ‘Man, I’ll fight Cerrone. I’ll fight Cerrone, see if he’ll fight me.’ Then Sean messages me back [saying] ‘Well I don’t know where you heard [Cerrone is moving to light], but Cerrone’s … He just … We’re in talks, negotiating.’ I was like, ‘Okay, cool.’

Vick then recounted the process that led to him learning he wouldn’t fight in the UFC Austin main event, and that Cerrone would.

“I had told Sean [I wanted to fight Cerrone] and that was the end of the discussion, right? Then I talked to Sean a few days ago and he’s like, ‘Yeah, don’t worry. We’re going to for sure put you on the [Austin] card.’ I said, ‘Sean I want the main event.’ He’s like, ‘well I can’t really give you the main event.’

“Then everyone starts tagging my name on Cerrone’s Instagram and stuff, him talking about how he’s looking for an opponent at ’55 or ’70. I said, ‘Donald Cerrone, I’ll fight you in either weight class.’ I said, ‘Hell, I’d rather fight in 170, so I don’t have to do a big weight cut.’ That doesn’t mean I’m trying to move up to welterweight now.”

“But this is a fucking joke, everyone [started] acting like I’m not big enough to fight a welterweight, but [Cerrone and Medeiros] are. They’re [former] lightweights too. They’ve had more lightweight fights than I’ve had. It’s a joke man. That’s a slap in my face. I’m not hating on Yancy Medeiros. He’s won three fights in a row. He deserves to be where he is. I’m not hating on the guy, but this is my fucking home state. I deserve that main event spot, that I’ve earned. I have one of the best records in the entire organization. I’ve finished three people in a row. Two of those fights were in Texas already. It’s not like I’m not willing to fight Cerrone, and I’m not willing to fight him at 170. I’ll do both of those.”

Given that James Vick was eager to fight in the Austin main event, and willing to fight Cerrone at welterweight, it goes without saying that he doesn’t know why he didn’t get the opportunity.

“Honestly, I don’t get it,” he said. “I have no clue. I don’t know who’s ass I’ve got to kiss or who I’ve pissed off or what [I need to do] to get these fights. That’s cool if Cerrone doesn’t want to fight me, you can’t put a gun to his head. I’m not saying Cerrone wouldn’t fight me. I don’t think Cerrone’s afraid of anyone. I’m not talking about it like that. I just don’t understand why, why the fuck I didn’t get the opportunity to fight him for the main event [in my home state], period.”

“It’s bullshit. Austin is three hours from my home. I’ll bring a huge fan base down there. I’m from Texas. I have one of the best records in the entire organization in any weight class. How the fuck are you going to tell me that I’m not worthy to fucking headline a fight in that corner in my home state three hours from my house?”

Do you think James Vick should have gotten the main event spot against Donald Cerrone in Austin?