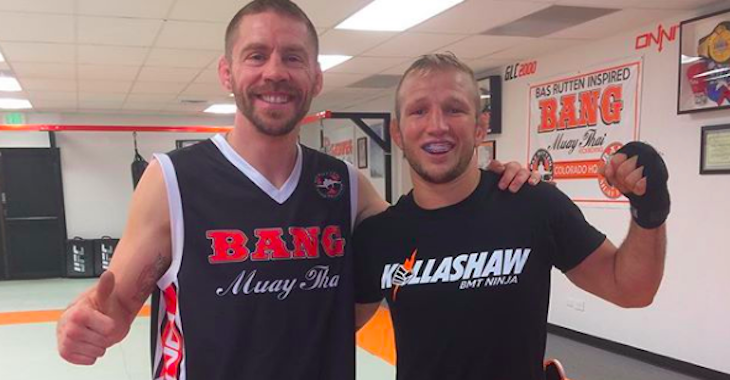 Yet according to Ludwig, who appeared on the latest episode of BJ Penn Radio, this trash talk doesn’t really affect him or TJ Dillashaw.

“It’s been one-sided with them talking all the trash,” Ludwig said on BJ Penn Radio. “We are doing what we need to do, which is focus on ourselves and, again, each and every day, improve as martial artists and human beings, and not get wrapped up in the trash talk too much. I don’t know if you watched the [The Ultimate Fighter] too much, but [the trash talk] was all a one-sided direction. It was mainly us defending ourselves. Again, on the show, we’re there to help our team, not necessarily to cat fight and act like we’re in high school. We just focus on ourselves. The animosity and all that is there, but again, it’s one-sided, cause we’re not trying to cause any drama. We’re just focusing on ourselves, and that’s what I always tell my guys to do, because the fight is never set until the bell rings. So with that in mind, why don’t we focus on ourselves, and continue to improve and enjoy our lives and enjoy the journey.”

“I’m just at a point in my life where I’m a martial arts instructor, I’m a husband, I’m a father,” he continued. “I’m not in high school anymore. It’s not 1995 anymore. So it’s just good to be basically past that stage in life, while others seem to want to hang out in that stage.”

While Ludwig assures he and TJ Dillashaw are not phased by Team Alpha Male’s trash talk, he does understand the reason for it.

“It sells tickets, and I understand it,” he said. “90% of what you see on television is just drama and pushing because that’s what sells. The excitement and the fear. But again, we’re almost going to go to war with North Korea. Do you really think I care what Team Alpha Male is saying about me and TJ? Not really.”

Do you think TJ Dillashaw can reclaim the UFC bantamweight title from Cody Garbrandt at UFC 217 on November 4?